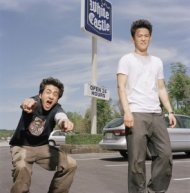 white-castle-why-don't-they-franchiseThe famous hamburger chain White Castle, known for its square-shaped greasy sliders and for being the first fast-food burger chain, was immortalized in the 2004 stoner buddy romp Harold & Kumar Go to White Castle. White Castle's restaurants, modeled after the Chicago Water Tower and traditionally made of porcelain, reflect a clean and consistent aesthetic that speaks to the quality of the food that consumers can expect from each and every visit to this elusive den of tasty sliders.

In addition to their unique look and menu, White Castle restaurants are known for being hard to find, as referenced by the epic, night-long journey of our aforementioned stoner pals. So, why is one of the nation's most talked-about fast food restaurants, with its cult-like following, absolutely nowhere to be found on most street corners? Why haven't White Castle's owners franchised their burger concept, extending their greasy goodness into all corners of the country?

The answer is actually pretty simple and proves that rabid customer loyalty and a consistent menu, while not sufficient for world-beating growth, can still take a brand a long way.

Surprisingly, the reason White Castle doesn't expand (and use the franchise model to do so) isn't so much that they hope to keep their restaurants as elusive as the famous Harold & Kumar buddy movie would suggest. It's actually that White Castle's core offering of quality food and semi-localized menu options at low cost demands that its restaurants be located near its supply facilities. And guess what? Building out or sourcing new facilities to support dramatic expansion across the country would require a huge investment (and, most likely, external capital and investor scrutiny). So, don't hold your breath.

Perhaps this is why people swear by White Castle's bite-sized sliders and launch grassroots petitions begging the company to open facilities in more cities. Instead, White Castle opts to operate a limited number of restaurants, all near the meat plants, bakeries, and fresh produce facilities form which they source their raw materials -- thereby keeping costs manageable, keeping profits up, and maintaining high levels of food quality while still allowing for special, localized menu options based on each restaurant's region. If customers have to go out of their way to enjoy the White Castle experience, it's no big deal -- as long as White Castle maintains that experience and the people keep showing up.

White Castle deeply understands its place in the fast food universe, and rightfully recognizes that rapid expansion (which would pit it in competition for customers against the very, very big boys) doesn't fit with its strengths. The company makes delicious little oniony burgers with a dill pickle on top: a simple, tasty proposition that attracts a sizable (though still relatively small) and very committed customer base. People know what they want when they come to a White Castle restaurant, and the company has wisely avoided tampering much with its menu. Although the company has added some new items, like a pulled pork sandwich, a basic selection of burgers and fries are what the company is known for -- and what has customers drooling on the drive over.

By contrast, other fast-food restaurants, such as the massive, worldwide McDonald's franchise, whose scale and ongoing growth requirements necessarily mean they MUST appeal to a broad demographic of customers, are constantly updating and changing their menu items. From low-calorie options to healthier side items like apples and milk, these fast-food chains monitor the latest food trends, experimenting with new products and combinations to attract yet more customers and keep their similarly aggressive and inventive competitors at bay. All the while, White Castle stays in the background, out of the fray of this competition -- realizing that its time-tested and simple menu may not steal away customers from the McDonald's of the world, but confident that it will continue to draw in the White Castle lovers.

Much like the beloved California-based IN-N-OUT Buger (which set the restaurant world abuzz when it finally expanded into to Texas), White Castle has established itself, quite simply, as a burger and fries joint that appeals to a ravenously loyal (though relatively small) customer base. For a private company, that's a very nice place to be.

Since opening its doors in 1921, White Castle has found a source of pride in being family-owned and operated. Unlike other burger joints, White Castle's ownership has strict control, even though the restaurant has nationwide marketing and advertising campaigns. White Castles are only available in 11 states, and the company attributes its very controlled growth over time to being family owned. It has been reported that, on average, White Castle opens just 10 new stores each year (compared to well over a thousand per year for McDonald's).

Despite remaining one of the most hard-to-find fast-food joints in the country, White Castle has a devoted group of customers who will do almost anything to get those famous sliders. "We do get stories about customers traveling an hour, two hours, even overnight to get our product because it's so unique. And you can't find it anywhere else," said Lisa Ingram, vice president of restaurant operations.

So, what's the bottom line? You can love their sliders and fries all you want, but don't plan on owning a White Castle restaurant of your own anytime soon -- unless you plan on marrying into the family!