Why This Hotel Chain Is No. 1 on Entrepreneur’s Franchise 500 List 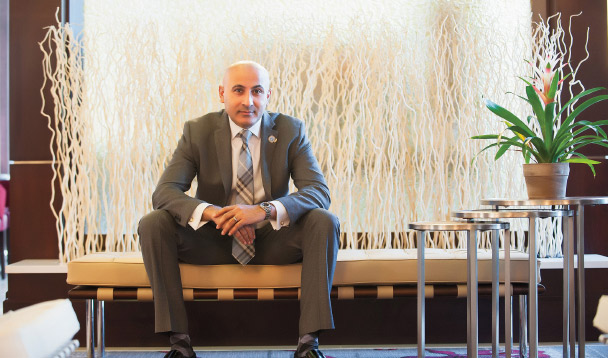 When Mitch Patel gets together with other hotel franchisees at investment conferences, they inevitably start talking in hypotheticals.

“Someone always asks, ‘If you had a vacant piece of land and could choose any hotel brand you want, what would you build?’ Unanimously, the first brand anyone talks about is Hampton,” he says. “Nothing’s even a close second. That’s how strong the brand has become.”

For Patel, building Hampton properties is no pipe dream. In the past few years his company, Vision Hospitality Group, has put up four Hampton-branded locations near its home base in Chattanooga, Tenn., and one in Schererville, Ind., with more on the way. While Vision operates 32 properties from various hotel groups, the Hampton system, Patel says, is special.

“You can sense the Hampton culture, which we call ‘Hamptonality,’ from property to property,” he explains. “It’s not hard to create a culture when a company owns all of its hotels. But when you have hundreds of franchisees and thousands of units? It’s much harder, and Hampton’s done a phenomenal job of spreading that culture to all the owners in its brand.”

Hotel guests also sense that culture of hospitality, which has helped Hilton-owned Hampton Hotels reach the top of the Franchise 500® for the fourth time in five years. Consumers have gotten used to Hampton’s forward-thinking generosity—free Wi-Fi, free hot breakfast, conveniently placed outlets, a no-questions-asked money-back guarantee—and the company, which just celebrated its 30th anniversary, is aiming to improve things even further.

“A few years ago, we updated all our lobbies,” says Phil Cordell, global head of focused service and Hampton brand management for Hilton Worldwide. “Now we’re thinking about the next 30 years, and as contracts come up for renewal, we’re asking franchisees to upgrade hotel exteriors and to do an upgrade on all guest rooms.

“We want to make sure we’re taking care of guests while also showing a return for our franchisees for investing with us,” he adds. “That’s why when they renew, we’re giving our franchisees extended terms. It’s a way to keep our brand strong. I like to say we’re putting a foot in today and three feet in tomorrow.”

Besides the longer licensing terms, Hampton is working on revamping its hotel snack shops into a concept called Treats, which will offer single-serve beer and wine along with snacks. “With our upgrades, we’ve really seen the lobby come to life, with guests having meetings there, watching TV or having a pizza with friends,” Cordell says. “So this is something we worked with franchisees to develop and implement. It’s not a bar, but it’s for guests who might want a beer while sitting in the lobby or to take a glass of wine up to their room after a long day.”

But the biggest news is that Hampton, which has nearly 2,000 properties in 16 countries, has signed an exclusive license agreement with a Chinese hospitality company to develop more than 400 locations in China over the next several years. And while critics think Hampton’s customer-friendly culture might not fly there, Cordell points out that in Russia, Poland and other parts of Eastern Europe not known for customer service, Hamptonality has become “contagious.”

In fact, Hampton’s values appear to bridge all age groups and cultures. “There’s a trend going on where brands come out that cater to a certain niche. It might cater to Millennials, or business travelers,” Patel says. “But Hampton is a brand that caters to all. I feel like it casts a wider net to a broad spectrum of travelers, from senior citizens and young business professionals to ball teams and families on vacation. Hotels are a cyclical business, but Hampton is in it for the long haul. There’s no better brand to partner with in the industry.”