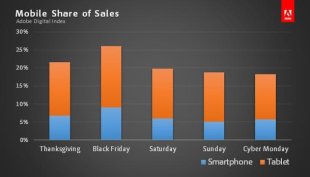 Americans spent $1.1 billion shopping on their mobile devices on Thanksgiving, Black Friday, and Cyber Monday. Purchases made by smartphone and tablet accounted for more than 20 percent of the $5.28 billion in online sales during the three super shopping days, according to an Adobe Digital Index analysis based on nearly 900 million visits to 2,000 retail sites and 3+ billion visits since Thanksgiving.

In total, $7.4 billion in online sales were generated over the five days from Thursday through Monday.

It was a record-setting weekend all around, and especially for mobile device shopping, according to Adobe, which tracks online sales and says its Adobe Marketing Cloud funnels 7 out of 10 dollars spent online with the top 500 U.S. retailers. Total online sales for the 5-day opening weekend of holiday shopping season rocketed up 26 percent from 2012, while mobile sales jumped 80 percent.

Most mobile purchases were made on tablets, not phones, Adobe says. On Thursday and Friday, iOS-based devices drove more than $543 million dollars in sales, while $148 million came in over Android-based devices. On Monday, tablet-based purchases accounted for nearly 13 percent of total online sales, with iPads taking the lead.

And while “brick and click” retailers—those with both physical stores and e-commerce platforms—dominated Thanksgiving weekend sales, Internet retailers took a 42 percent share of sales on CyberMonday.

Where online buyers are located is also of note. On Thanksgiving and Black Friday, the top 5 states with the highest revenue per visitor were Wyoming, Vermont, South Dakota, North Dakota, and Alaska. On Cyber Monday, shoppers from Alaska and Hawaii drove the most mobile revenue with nearly 27 percent verses the 18 percent national average.

Social media was not as influential in driving sales as one might have expected. Only $148 million in online sales between Thanksgiving and Cyber Monday resulted from social media sites; that 2 percent share is unchanged from last year. Twitter delivered 9 percent of total online sales—up 24 percent year-over-year, while Facebook produced 64 percent of all social media-driven sales—up 12 percent from 2012. Pinterest increased its share of referral traffic by 17 percent.

The message to retailers is “optimize for more mobile purchases in 2014.” 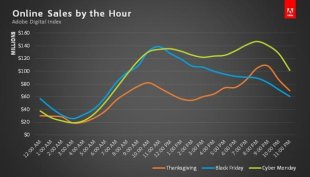