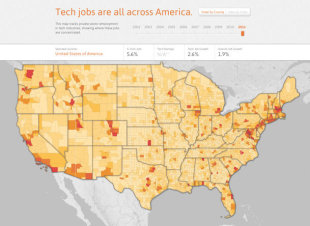 There's an economic renaissance happening in America. The 21st Century jobs that are leading the American economy are powered by technologies created every day in labs and garages by students, innovators and entrepreneurs. It's a story many of us have become familiar with — or so we thought. The truth is, the story of the technology-powered economic revival goes beyond the traditional tech centers of Silicon Valley and New York; it's a story that's being played out in communities all across the country.

More and more new data points and stories are highlighting that tech is leading the job revival in America. And this rebirth, though led by the traditional centers of innovation like San Francisco and Silicon Valley, is also taking root in every corner of this country, from Detroit to Kansas City, Los Angeles to Austin, Boise to Boulder.

I helped found Engine Advocacy last year to assist the startup and small business communities in the U.S. thrive via changes in policy, and we are currently working with the Bay Area Council Economic Institute to provide a deeper understanding of the effect that technology has on the economy overall. What we have found, in a report released Thursday December 6th, is that technology has a significant impact on hiring and growth by providing a multiplier effect which catalyzes the creation of jobs beyond the technology companies themselves. While there is an oft-heard concern that technology and automation is killing jobs, tech's impact is deeper than it seems.

Tech companies have an effect beyond the developers, engineers and designers they hire for themselves. The report, which uses data from the U.S. Census Bureau, shows that there is a multiplier effect where one job created by a tech company creates 4.3 jobs in the non-tradeable sector. That's four more doctors or barbers or builders or lawyers that have a job in a given area because a tech company made a hire or used a local vendor. According to the research, that's three times the number of jobs created when a manufacturer hires a new worker. That's why we can see cities like Detroit, long written off by many, beginning a path to economic viability again through a thriving tech startup scene. More and more cities are taking the lead on fomenting the growth of tech and startups in their communities.

The full report is available here, and a visualization of some of the data can be seen here. But these findings only set the stage for more to come. We're excited to start looking at quantifying the effect that technology has on small business, and putting numbers behind what we know anecdotally: Entrepreneurship and job growth are fuelled by advances on the internet and in our ability to connect. There's a great story being told in the data, of economic growth taking root in new and diverse communities. The tech industry, beyond advancing and driving growth in the tech sector, has a significant impact on small business and on the economy as a whole.