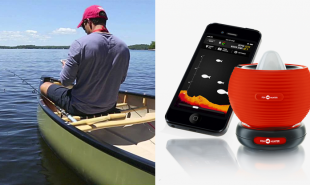 You may think that monitoring the locations of fish is a job for marine scientists with lots of technical equipment, but the process is becoming much easier. In recent weeks we’ve even seen efforts from a coastal safety charity track sharks so that they tweet when they near the beach. Now FishHunter Sonar is bringing even the time-old art of angling into the 21st century, enabling users to increase their haul by locating fish on their smartphone.

The device itself is a pocket-sized, round float that features GPS and military-grade sonar technology, designed to be attached to a fishing wire and tethered to the dock or boat. Users can connect to it through Bluetooth, using the companion app to carry out a wide range of tasks. Most importantly, it lets anglers see where the sonar device is detecting movement of fish in real time, enabling users to track fish habits and map the topography of the lakes they typically frequent. The app can also be used as a log book, detailing the location and fish type and weight of every catch, and even including pictures. This feature also allows fishers to track their best catches over time to work out the areas they have the most success.

The FishHunter Sonar device is prices at CAD 195.99, while the app is free for iOS and Android devices. The sports market is currently undergoing a makeover thanks to the rise of smart tech to help players improve their performance. Are there other less active pastimes that could still benefit from digital devices?