Public toilet for dogs lets owners flush away the mess 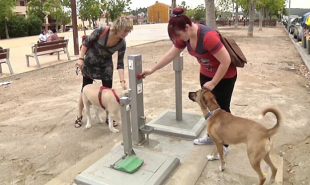 There’s been a much larger crackdown on dog littering in the past few decades, with owners now expected to clear up their pet’s mess or face a fine. However, it remains a problem in some areas. Madrid’s Cacas Express recently took the extreme measure of tracking owners and mailing them any dog poo they leave through the post. A much more friendly alternative is now being trialled in northeastern Spain, where streetside public dog toilets give pooches the same luxury as humans when it comes to spending a penny.

Devised by Enric Girona, the machines have been donated to the town of El Vendrell to make it easier for owners to get rid of dog waste. The toilet points feature two separate machines, one for ‘number one’s and one for ‘number two’s. The first features a grid to simply drain the urine underground, along with a rinser. The second uses a hole with a lid that dogs squat over to do their business, and owners then press a button to flush the excrement away.

Girona said that depending on the success of the trial, the machines may go into production and exported to other cities with poo problems. Owners may find the idea more hassle than it’s worth, but it could help El Vendrell citizens avoid fines of up to EUR 750. Would this work in your part of the world?