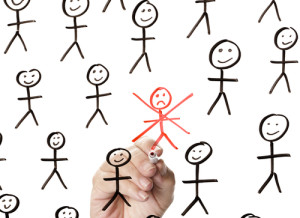 Rejection is inevitable in life, especially if you’re making an effort and putting yourself out there. Here are some thoughts I use to make it less painful when I get it.

First, try not to expect to get it before you actually do. Most of the negative situations you worry about will never happen. If you fret and dread what might occur it will show all over your face, in your voice, and in your manner. People will see it and give back what you project and seem to expect.

Consider the source, timing, situation, politics, and any other contributing factors so that you accurately understand the rejection. If in your estimation it’s valid — and usually at least some of it is — immediately do something about your actions/behavior to minimize the pushback from recurring. Later thank the person(s) who gave it, briefly explain the changes you made, sustain the changes, then forget about the rebuff.

Get callused to the fact that not everyone will like you or what you do no matter what. Think about, it, you don’t like every one and every thing others do either.

There is a percent of the population that will disprove of you regardless of how good you are. Take heart in the fact that some people don’t like the Pope, the U.S. President, Miss America, or Sponge Bob either. Life is not logical or fair. As the country and western song goes “sometimes you’re the windshield, sometimes you’re the bug.”

If you’re guilty of any of the following behaviors you will increase your chances of receiving negative reactions from people so try to eliminate them from your operating style now:

-Lack of organization or goals

And finally, take some consolation in the fact that at least one of your friends will secretly be delighted in your rebuff or setback. You’ll make at least that someone happy