Once Fired By Donald Trump, Now Running His Own Show 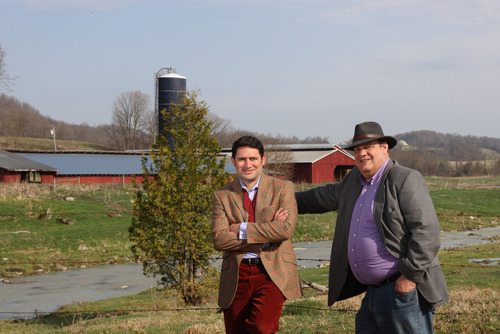 If the brand of booze he sells wasn’t such an unqualified success, 38-year-old Raj Peter Bhakta, a first-generation Indian-Irish-American, might be feeling like a total loser by now.

The product of a privileged upbringing and private schooling, a 1998 graduate of Boston College, and the founder of a dotcom that sold to Chrysler in 2002, Bhakta’s subsequent career moves had been a series of defeats: In 2004 he was voted off The Apprentice; in 2006 he lost his Republican-ticket bid for U.S. Congress in Pennsylvania to a Democrat; and with an idea for a TV show, he travelled to India in search of the next Crocodile Hunter but failed to find him among 600 million men. (His one “success” was to spotlight weak U.S.-Mexico border security by riding an elephant, accompanied by a six-piece mariachi band, along the Rio Grande for 90 minutes.)

His fortunes changed, however, in 2007 when he bought a 1,300-acre farm in Shoreham, Vermont, and met Dave Pickerell, the former master distiller at Maker’s Mark, pictured here, at right, with Bhakta. As luck would have it, Bhakta has a passion for rye whiskey, and Pickerel had gotten his hands on a stellar supply of the aged spirit from Canada that he wanted to bring to market.

“I never dreamed I could be in the whiskey business, but I had always had an appreciation,” Bhakta says. “Dave had what he thought was the best rye whiskey in the world, so I said, ‘let’s bring it down and develop it.’” Thus, WhistlePig Straight Rye Whiskey, an exclusive 100% and 10-year rye, was born in 2010. It’s now ranked tops by Wine Enthusiast and sells for $65 a bottle.

“I was facing true bankruptcy when I started the business with $175,000,” Bhakta says. “If I didn’t make that work I was finished.”

To those who would point out that having $175,000 on hand isn’t such a humble beginning, he says, “I turned a couple hundred thousand into tens of millions. It’s the same principal that takes $100 and turns it into $1,000. My father came to this country with $60 in his pocket and made it happen. It’s the ability to balance your books and make a buck at the end of the day.”

Bhakta says his business model is a “two-pronged offensive”: Secure a consistent supply of phenomenal whiskey, while pursuing an agriculture vision to cultivate rye and create the first single-estate seed-to-bottle operation in the country.

The supply from Canada, he says, is sufficient to grow the business over the next decade until he can bring his own estate-grown rye to market. “The biggest challenge is going to be netting the quality of product that we are currently putting out. It’s the highest rated rye whiskey in the world,” Bhakta says.

He likens the flavor to “an unbroken bucking bronco” and explains what makes it so: “The product that we have in the bottle was the single-malt flavoring stock of a volume whiskey. The Canadian distillery used it as background in a cheap blended whiskey. We bought the pure flavoring stock in barrels, which is why it’s such a big robust highly regarded taste.”

This month, WhistlePig will release its second edition of a 13-year-old, 125 proof BossHog rye—a limited supply with about 95 total barrels.

Despite being in the early days of a decade-long launch with 40 employees on board, Bhakta says the brand is already profitable. “I had one very important operating premise: eat what you kill and make a buck at the end of every month,” he says. “We’ve been profitable since day one. That is the key to a sustainable business.”

Aside from his innate business wisdom, Bhakta also admits to gleaning something from his 9 weeks on The Apprentice. “The thing I took away from Donald Trump was that if you have a product—whether it’s a consumer product or not—it needs brand recognition. It’s a very fundamental piece of knowledge that a remarkably high number of small businesses forget,” he says. “There are so many products out there that are phenomenal that people don’t know about, and there are inferior products that sell well due to sales and marketing.” Fortunately, generating attention is one of his strengths.