In 1971, a young writer graduated with his Masters degree in Journalism from Northwestern University. He spent the first 13 years of his career writing professionally and made a living from it, but without major success. In 1983, he released his fourth book, The Armageddon Rag.

Nobody read it—the book was a total flop. In the author’s own words, “It essentially destroyed my career as a novelist at the time.” [1, 2]

But he was determined and so he found ways to keep writing. He landed a job writing a television script for CBS. Soon after, the show was cancelled. He managed to work his way onto another TV series, this time on ABC, but it was cancelled again. In 1991, after nearly a decade of bouncing around, he decided to start writing fiction again.

Martin is the best-selling author of the fantasy series A Song of Ice and Fire. The first book in the series, A Game of Thrones, has also been turned into a blockbuster television series on HBO. (The first season of the show was nominated for 13 Emmy awards.) [3] The epic 7-part series that hasn’t even been finished (Martin is currently working on the sixth book), but it has already sold more than 25 million copies.

What is most surprising isn’t how good the books are, but how, exactly, Martin writes his best-selling works…

The Power of WordStar

In total, Martin has written almost 2 million words for the series thus far…

That is a total of 1,770,000 words—an incredible effort. [4] And what does Martin use to churn out such an amazing quantity of work?

He writes the novels with a program that most people have never even heard of: WordStar 4.0. To give you an idea of just how ancient this program is, here’s a picture of the typical WordStar screen… 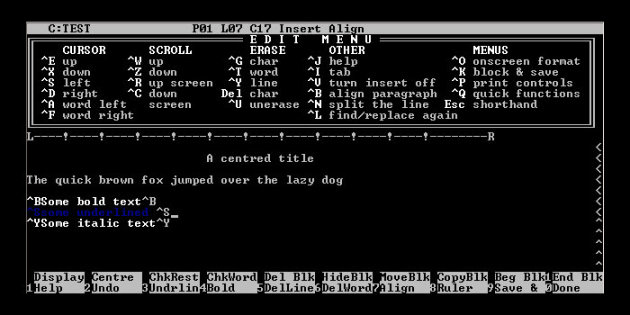 Martin says, “I still do all my writing on an old DOS machine running WordStar 4.0, the Duesenberg of word processing software (very old, but unsurpassed).”

He goes on, “I am not on Facebook. I am not on Twitter. I will not be on the next new thing to come along, the one that makes Facebook and Twitter as obsolete as GEnie and CompuServe and The Source, those halcyon communities of yore.” [5]

One of the greatest lessons I’ve learned from weightlifting is that there are 3 simple things that you need for success.

Focus. He writes on a computer without the internet, without social media, without apps or distractions or graphics. But his computer can do one very important thing: type words. And typing words is his craft. That’s what he needs to create. He is 100 percent focused on doing the work that matters and he has completely eliminated anything that impedes that goal.

Consistency. Martin was a working writer for twenty years before he sat down to writeA Game of Thrones. He worked on shows that were cancelled and found himself without a job. He wrote early books that flopped commercially. And I’m willing to bet that if A Song of Ice and Fire was a total dud, then he would have found another way to keep writing. He’s not just focused on writing when it’s easy. He’s focused on writing, plain and simple.

Patience. I’m sure Martin wanted to achieve glorious success and commercial fame just as quickly as we all do. I’m sure he would have liked his first book to sell 25 million copies. I’m sure he didn’t want to put in 20 years of work to find commercial success. The difference is that he didn’t let the urge for overnight success derail his commitment to daily work. The greatest display of patience is a continued commitment to the process when you’re not being rewarded for it yet. [6]

The Minimum You Need to Succeed

George “WordStar” Martin is selling more books than nearly anyone on the planet and his computer can’t even send an email. Think about that for a moment.

So often we think that we need more to be successful. More outside funding for our startup. More software programs or productivity tools to handle our to-do list. More business contacts, a bigger network. More clothes or cars or credit cards.

It’s very possible that eliminating distractions, not accumulating resources, is the best way to maximize your potential. Constraints drive creativity. What is the minimum you need to succeed?

Thanks to my friend Jon Krohn for sharing the story about Martin’s writing habits with me.

This article was syndicated from Business 2 Community: Minimalism, Success, and the Curious Writing Habit of George R.R. Martin