Millennials Are Taking Jobs Rather Than Careers 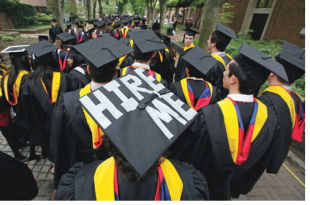 Millennials Are Taking Jobs Rather Than Careers

Whether the benefits package and pay were too good to turn down, the schedule was flexible, or it was the only thing that was open, we accept jobs and maneuver different career paths for a myriad of reasons.  A few may land their dream jobs promptly after moving the tassel of their graduation cap to the left side, others say “Yes” to positions to begin scraping at student loans, and some take jobs to please their parents and fulfill expectations.

Millennials are criticized for “expecting too much out of life,” but what if we shift this notion of “expectation” to one of an unwillingness to settle. What if this isn’t expectation but rather aspiration? There’s a difference between “getting settled into your career” after college and “settling for a career.” What if we shifted the negative label of being “demanding” to positive one of “ambitious” (a synonym)?

In addition to being the largest age grouping in American history, Millennials also assemble as one of the country’s most-studied generations. Regardless of obstacles, Millennials are not allowing roadblocks to stifle their path to success. While some individuals in generations before have plaques on their office walls for “30 years of service,” most Millennials are looking for something different. Largely raised in households riddled with layoffs and underemployment related to the recession, many Millennials think twice before committing their souls to one company. They will be the first to embrace the job hopping that their grandparents shake their heads at, and they will buck the trend of settling as they age. That is, if they can acquire a job in the first place.

While not all Millennials have had a difficult time getting jobs, it is a fair statement to stay that most have. And when they get the job (which may not even be in their field), many are taking on side jobs as well. In March 2014, The PEW Research Center reported that only 6% of Millennials believe Social Security will be able to provide for them at the same level as today’s retirees. So while many in past generations were committed and loyal to one (or two) companies throughout their career, Millennials are hustling and not staying in one place for too long. They are looking for the best offer and the quickest way to advance.

Psychologist Jeffrey Jensen Arnett’s surveys of Millennials for Clark University have found that 79% say it’s more important to enjoy their job than to make money. Eighty-six percent want a career that does some good in the world. Millennials want their work to be their passion. The driving force behind the allusive wonderlust. They consistently cite social impact as one of the most important roles of business. Collectively they want to make a difference and have a positive effect on not only the company they choose to work for, but also their local environment and the global community which is propelled by one of the core Millennial mottos: “Doing well by doing good.”

This article was syndicated from Business 2 Community: Millennials Are Taking Jobs Rather Than Careers