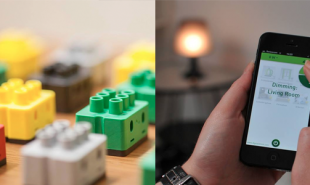 Springwise has seen its fair few innovations such as the Revolv and Ubi that are leading the way in using tech to give residents more control over their home. Switzerland’s digitalSTROM is the latest to offer the possibility of smart homes, with small, intelligent blocks that turn any offline appliance into a smartphone-controlled device.

Each digitalSTROM module features an integrated chip and sensors that can be connected to the power source that controls each individual appliance — whether it’s a lamp, television or electric blind. The modules can collectively perform around 60 different functions and are color-coded according to their capabilities. The blocks are installed by an engineer but require no new cables, and communicate with meters fitted to each home’s fuse box. The system is then completely controlled by the homeowner through the digitalSTROM app, which allows them to configure each appliance and keep track of energy use in their property. Since the devices also use one integrated system and control center, users can make their devices talk to each other.

Electronics companies are slowly introducing smart devices into the home, but rather than replacing all of their existing appliances or waiting for manufacturers to catch up with the Internet of Things trend, digitalSTROM enables its customers to retrofit smart tech into their house. Are there other ways to adapt ‘dumb’ devices to work with the power of the web?