With the eventual iPhone 5 launch date coming closer, Apple is in crisis mode. Leaks about the iPhone 5S keep filtering out of their company. Nobody knows why Apple is being so lax, or whether they’re doing this intentionally. We have seen lots of leaks, some of which you might not understand, but you’ll definitely love the end results.

Here are some of the main leaks we’ve seen. 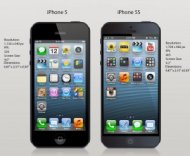 iPhone 5S Leaks That You Are Going To Love

Apple has come up with two new colours. How you feel about the new gold and graphite shell cases depends on who you are. The addition of these sleek and classic colours is undoubtedly Apple’s attempt to hit its high-end market once again. It wants to make the iPhone 5S an object of desire to confront the rising challenge from Samsung. NDTV released a video revealing the two new colors.

In what has been credited to 9to5Mac, the iPhone 5S seems to be addressing many of the concerns brought about with its previous incarnations. In the video provided by 9to5Mac, they took apart a copy of the phone and looked at the rear shell casing. The innards of the phone reveal a much less cluttered space.

The battery space has increased, whereas the logic board is smaller, and the same applies to the chip set. What this means is the phone will have a bigger battery to further enhance the phone’s battery life, which has been the subject of much criticism previously.

It’s also thought the space for graphics cards and processors has been increased. This would enable better graphics and a faster processing time, which will help people who prefer to have lots of apps open at the same time.

Like with practically every new iPhone, we see a new camera. This time, it was CNET which drew attention to it. The latest leaks say it will have a dual LED flash with a larger f/2.0 aperture. In plain English, this means the camera will produce better images because more light will be able to get through. Inadvertently, Apple also improves the phone’s low-light picture taking capabilities.

Ever get tired of your idiotic friends trying to sneak onto your phone to mess around with everything? Now you don’t have to worry about it anymore. Leaks strongly indicate AuthenTec is working with Apple to bring fingerprint scanners to the iPhone. AuthenTec was acquired by Apple in a major takeover back in 2012.

This is the most exciting prospect. Biometric technology as a way to boost security has been on the cards for a long time. The iPhone’s greatest legacy could be bringing this technology into the mainstream world. We could soon see it with other phones, online purchasing, and cloud technology.

Judging from images released unofficially, the fingerprint system will replace the Home button.

These are just some of the leaks ahead of the iPhone 5 launch date. With less than a month to go, the Apple community is ready and waiting to go!