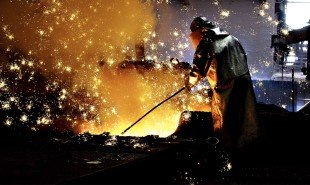 ArcelorMittal — the world’s largest steel company — produced 93.1 million tons of steel in 2014, generating a problematic amount of carbon monoxide and carbon dioxide. But now, the company is launching a pilot scheme at their Ghent plant in partnership with bioengineering organization LanzaTech, which will convert this waste product into useful ethanol, using a microbe originally found in rabbits’ guts.

LanzaTech’s system captures carbon monoxide using a customized clostridium microbe and converts it into bioethanol, which can be sold to power cars and airplanes. The scheme is expected to cost EUR 87 million, but if successful the plant could eventually produce 47,000 tons of ethanol a year, and would potentially lead to the system being utilized in all of the company’s factories.

ArcelorMittal are not the first corporation to experiment with turning a polluting byproduct into a financial asset: we recently wrote about United Airline’s new biofuel made from household trash. Both schemes could benefit the companies financially, as well as the environment with its renewable energy alternatives. Construction is expected to begin in 2017. What other waste products could be transformed in this way?