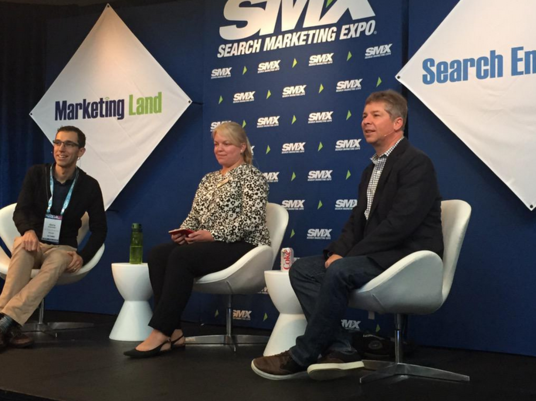 As I drank my morning coffee in the large conference space by the Seattle waterfront I wasn’t quite sure what to expect from Google’s VP of Product Management, Jerry Dischler. What could Dischler reveal that wasn’t previously revealed in the Google AdWords livestream back in May? To my surprise, he confirmed some future functionality I’ve been pondering and even revealed some shocking statistics and future projects the AdWords product team is working on. Yesterday morning at SMX Advanced, Search Engine Land’s Ginny Marvin and Danny Sullivan did a phenomenal job of asking all the right questions to get Dischler talking. So PPC people listen up, this is exciting stuff! For real? I’m quite suspicious over this one. Just thinking about the way that I personally interact with my tablet, I’m not sure that I’ve ever made a purchase via the device. Which leads to my next question, what is Dischler defining as a conversion? WordStream’s data scientist Mark Irvine and I were both suspicious and decided to find out for ourselves. From a data-set of about 200 clients we found 15% have a higher CVR on tablet than desktop. Common industries within that 15% that convert higher on tablets include healthcare, tech, and real estate. Of course this data would go against Jerry’s claim, so my suspicions still run high.

Dischler also confirmed that Google will continue to group desktop and tablet as one. Sadly, hopeful marketers should not look forward to tablet bidding because it’s not coming anytime soon! Dischler said that Google still finds the behavioral patterns to be so similar on the two devices and therefore splitting them up remains illogical. Again, hard to believe thinking about the way I personally interact on my desktop vs. my tablet, but let’s move on to the next one.

Now we’re talking! A large chunk of the livestream was focused on mobile ad formats for four verticals: automotive, shopping, finance, and travel, leaving marketers in other industries thinking “what about me?” Yes, we feel your pain! Luckily, Google has not forgotten about you!

WordStream founder Larry Kim, who happened to have a front-row seat at the livestream, predicted that Google would release mobile ad formats for other industries as well. Yesterday, to hear it from Dischler himself just confirmed our guess. “For each vertical we’d like to create a template that will better lead to an answer,” says Dischler. “When session lengths are compressed as they are on mobile, we need to drive people to answers more quickly,” says Dischler. “On mobile, people also expect more rich content. So we’re going to build products that work well on mobile first.”

Dischler confirmed that text ads are here to stay, but Google plans to “enhance text ads to make them more useful for users, especially mobile users.”

At WordStream we’ve found that mobile conversion rates lag far behind CVR’s on desktops and tablets, so Google’s plans to revamp mobile ad formats for advertisers is truly game-changing. “Our goal is to drive people to answers faster,” says Dischler. He went on to speak of their plans to make ads much richer and more interactive on mobile because if the ad looks better it’s likely to perform better. #3: Google Will Re-Build and Modernize the AdWords Interface

Dischler casually snuck this in during the closing Q&A, which sort of made me love him. Oh, no big deal, just an entire makeover of the platform many of us spend our 40+ hour work weeks slaving away in.

Unfortunately Dischler didn’t dive too deep into what Google’s plans are, but I would expect that a lot of the holes and frustrations that all of us are constantly throwing our heads down about will be addressed (hopefully). To say the least, this news is very exciting for all PPC marketers who are sick and tired of the outdated and not so intuitive AdWords interface.

#4: Coming Death of the Keyword?

Keywords are dying! I’ve been preaching this for the last few months due to subtle hints Google continues to drop. From killing off the exact and phrase match type to evolving its identify based marketing functionality on Display, it seems that Google’s moving away from the keyword and towards more of a people-based targeting method. Google also revealed during the livestream that 15% of searches on Google are unique and have been searched for before.

Yesterday, Dischler threw another hint our way when he spoke about the daunting process of keyword targeting. “Selecting 250 million keywords can be painfully time-consuming, but if you can just upload a feed,” says Dischler. “There’s a huge advantage to structure-based data rather than keywords.” Of course he’s talking about shopping ads where advertisers in the industry don’t need to manage keywords, but can instead just upload their merchant feed, making it much easier to set-up and maintain.

Google recently revealed a compete re-design of dynamic search ads, which is being released in the coming months, and yes, keywords are still part of this redesign, but it will make the process of finding the right keywords much easier. Essentially the new ads with be created by first having Google’s webcrawlers scrape through the content of your site, match unique pages with keywords, and then dynamically create ads that match the most relevant landing page.

I’d suspect that at the very least, Google’s shifting away from the keyword match type targeting that we know.

Ginny Marvin asked Dischler what’s next in terms of more custom targeting (since Google knows so much about us it’s frightening). Dischler danced around the question, but did confirm that Google has plans to enhance the functionality of remarketing. “There are two parties Google values as important, users and advertisers. For users the main concern is maintaining trust,” says Dischler. “User data is held to a high standard. On the other hand advertisers are saying ‘You’re letting us get some of this custom data, but not all.’ They want more.” To combat this Dischler pushes RLSA’s as a functionality that advertisers should not be missing out on, and finally confirms that, “we definitely plan to do more in the remarketing space, but we have to be very cautious.” #6: It Will Be Easier for Users to Buy Through the SERPs

Google has recently revealed that the buy button is real, but Dischler confirmed that Google is not attempting to become a retailer, phew. “The buy button is really about mobile and driving mobile transactions,” says Dischler. “In retail, mobile conversion rates are a little lower — keyboard input is difficult, sessions are shorter, you don’t always have payment credentials available.” Google’s main goal is to focus on the 5% of time that really matters when people are making purchase decisions, and make it really great, according to Dischler.

Other themes discussed during the talk included micro-moments (of course), cross-device targeting, attribution functionality, the accuracy of data, and in-store visits to name a few.

Dischler closed the talk by deflecting a humorous question confirming that Google is not manipulating the ad auction to increase profits. “There’s no conspiracy or collusion. Search and ad personalization are done totally separately,” says Dischler. Well, that’s a relief!

To conclude, Google plans to continue to build great platforms for the moments that matter – the micro ones of course.

What are your thoughts on the future of Google?

Are you surprised by any of the things Dischler revealed?

This article was syndicated from Business 2 Community: 6 Shocking Things Google Revealed About the Future of AdWords at SMX