Digital marketing today has largely become a tale of two generations, the Baby Boomers and Millennials. In short, the Boomers have the dough, the Millennials have the numbers, and the digital marketers (DMs) want both. Aside from being the largest demographic in US history, DMs want Millennials because, being a digitally savvy lot, the assumption is these young Turks use technology more than their Boomer counterparts. They also represent the future of an increasingly internet-driven US economy, and by extension, the future paycheck of DMs great and small. However, in a cruel twist of Dickensian proportions, right now the Boomers have the cash – 70% of all US disposable income to be exact. Given the massive size of both demographic groups, most DMs find themselves targeting either Boomers or Millennials or, as is often the case, both.

What further confuses the picture, and frankly makes the whole thing bloody ironic, is that much of the existing DM creative class is littered with disaffected Gen Xers holding key management positions sandwiched, like the cream filling in an Oreo cookie, between Millennials and Boomers. In fact, it’s not uncommon occurrence to find a digital agency packed with young Millennials and managed by Gen Xers serving a client roster of Baby Boomer-owned companies trying to cater to Millennials and/or Boomers.

The good news for all parties involved is that digital is the unifying factor in this equation. For example, stereotypes aside, Baby Boomers actually are integrating digital media into their daily lives, and quickly. A recent post by eMarketer highlights this fact quite nicely. The article cites an Ipsos/Google study showing Baby Boomer/Senior tablet and smartphone users performing all kinds of marketer-friendly actions: 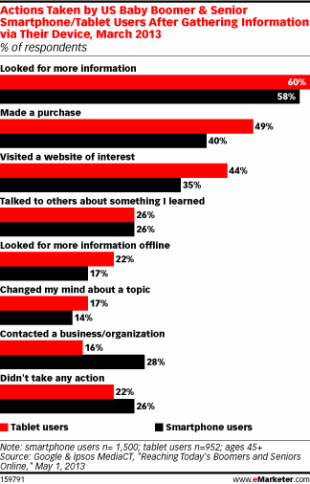 As it turns out, Boomers are doing a number of things that suggest a sophisticated, Millennial-esque adoption of mobile tech, including visiting websites of interest, sharing information with others, and contacting businesses found online. For me, though, one stat in particular stands out: 49% of Boomer/Senior tablet users and 40% of smartphone users made at least one purchase within the last year after gathering information on their mobile device.

Isn’t that the goal here?

Numbers like these shouldn’t surprise, given that the Boomers have money and, as the older among them reach their retirement years, time. This reminds me of an old phrase a buddy of mine’s father used to say: “most purchase decisions come down to one question – which do you have more of, time or money?

I suppose the Boomers have both.

Lest we forget, they have the numbers, too. Long before marketing to Millennials was all the rage, Boomers were the chosen demographic, and for good reason. Out of a total US population of 313 million people, Baby Boomers can claim approximately 81 million (26% of the population); by contrast, Millennials number approximately 85 million (27% of the population). According to data from eMarketer, 75.9% of Baby Boomers are internet users (61.5 million), and 59.6% are digital buyers, i.e. individuals who have made at least one online purchase via any device in 2013. That comes to roughly 48 million people.

48 million people with time and money.

Numbers from a 2011 Forrester Research study cited by Marketing Charts underscore the Boomers’ proclivity for online spending, finding those aged 50 and older spend nearly $7 billion per year online. Tech-savvy Boomers also use the internet as their primary means of comparison shopping for major purchases. In fact, the study found that “Older Boomers” (age 56-66) spend the most online of all generations, having spent an average $367 online in a three-month period; “Younger Boomers” (age 46-55) were the next biggest spenders ($318), closely followed by Gen Y (age 23-31), who spent an average of $311.

Apparently, the older you get, the more you spend online. Who knew? I remember a time when my grandparents sat around playing bridge and listening to Lawrence Welk. Is there an app for that?

As a final tantalizing stat, eMarketer predicts that the percentage of US Boomers on the mobile web will surpass 50% this year, reaching 28.8 million.

In the end, DMs are a practical lot- we follow the demand- and the money. It’s beyond dispute that, at least in the online world, the Millennials are everywhere, and their young. For DMs, Millennials represent the low-hanging fruit, the long-term bet, the safe play. However, as everyone scrambles to capture Millennial mindshare, let’s not forget about the Boomers, the original uber-demographic.

I recently asked a colleague a simple but important question: how are Boomers being marketed to online? She reflexively began to answer and then paused, registering a degree of utter bafflement; it’s as if I had asked her to explain the Unified Field Theory on a cocktail napkin. After what seemed like a full minute had passed, she answered, “there not???” Her questioning tone served to underscore the point.

The Boomers are online; they have the time and the dough. Let’s figure out how to start marketing to them.