Back in March, we took a Southwest Airlines flight from Chicago to San Diego. It was a fairly lengthy flight, so I had planned on catching up on work using the airline’s WiFi. Unfortunately, things did not go as planned.

The signup process went well. I entered my credit card number for the $8.00 WiFi charge; however once the transaction went through, nothing else worked.

I looked at the guy across the aisle from me, and he was having trouble too. I then looked back at my buddy Jeannie Walters of 360 Connext, who was on the flight with me, and she was having no luck either.

We hailed a flight attendant, and told her the WiFi was not working. She was pleasant but began explaining basic connection concepts, as she was obviously used to dealing with operator error. After a minute or so, we convinced her that the three of us knew what we were doing and that the WiFi simply wasn’t working.

She went to investigate, and after another 5-10 minutes, she returned to tell us that the WiFi could not be repaired in flight and that we would have no WiFi service on this trip. Since we did not have WiFi to receive email, I was not even sure if the $8.00 charge had gone through, so I didn’t sweat it much.

The flight attendant was very customer-focused and made sure to offer free drinks to make up for the inconvenience. However, I had a ton of work to do, so I declined.

Service Recovery After the Fact

A few days later, I discovered a charge for $8.00 on my credit card from Southwest Airlines; the charge had gone through!

The situation made me think of one of the core concepts we discuss here on the blog and in our workshops about the hassle factor and the idea of customer effort. This situation is a perfect example of how small hassles can affect the customer experience.

After seeing the charge, I added “call Southwest for a refund” to my To Do list. The charge was so small, however, that it never made it to the top of the list. The situation was mildly annoying, but more important matters always got placed on top of it.

So, imagine my surprise when a few days later I received the following email from Southwest Airlines: 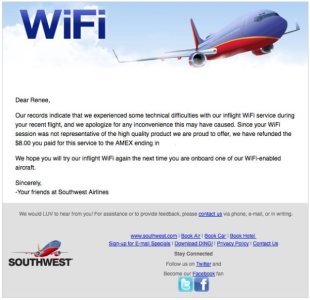 The actual refund email from Southwest Airlines. It is in my wife’s name, since we used her credit card.

As you can see from the email above, Southwest proactively determined who had paid for WiFi on the flight and reimbursed the charge. It is a great example of proactive service and recovery!

The proactive systems that Southwest must have in place to flag bad WiFi on a flight, know who paid for it, and to process their refund are extremely impressive.

In the end, a single WiFi charge would not have been enough to sour me on the company. Technical issues happen, and Southwest made a reasonable effort to make up for it by offering complimentary premium beverages in the moment.

However, by following up after the fact, Southwest was able to resolve a small issue without any extra effort on my part. While the resolution could have been a little faster, the overall recovery was very well done and increased my loyalty to Southwest.

The takeaway for all customer experience professionals is how important proactive service recovery can be around small things. The bad WiFi was an annoyance — the thought that I would have to spend 20 minutes on the phone to get the charge reversed was a true hassle. Southwest saved me the time, effort, and frustration — and that was the true customer service win!

This article was syndicated from Business 2 Community: Southwest Airlines: A Service Recovery Surprise