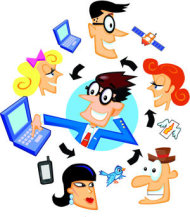 Would your workplace social media policy hold up to NLRB scrutiny?

That some employers routinely ask job applicants to hand over their Facebook passwords was provocative news in May when two U.S. Senators asked the Attorney General to investigate the legality of the practice. Employers demanding to snoop around inside a potential hire's Facebook account? Why not ask prospective employees to hand over their personal diaries and family photo albums too? The sleaziness of the practice just seemed obvious.

But the National Labor Relations Board has determined that employers need guidance when it comes to writing workplace social media policies. The independent federal agency recently released a report focused on employer policies governing employees' use of social media.

"Employee use of social media as it relates to the workplace continues to increase, raising various concerns by employers, and in turn, resulting in employers' drafting new and/or revising existing policies and rules to address these concerns," wrote Lafe Solomon, Acting General Counsel of the NLRB, which acts to prevent and remedy unfair labor practices committed by private sector employers and unions. "These policies and rules cover such topics as the use of social media and electronic technologies, confidentiality, privacy, protection of employer information, intellectual property, and contact with the media and government agencies."

NLRB reviewed seven employers' social media policies, and found provisions within six of them to be overbroad and thus unlawful because they interfere with rights of employees that are protected under the National Labor Relations Act. A seventh policy, as revised by an employer, was deemed lawful under the act, and was included in the memo as an example of an appropriate policy. To read the entire 24-page document, link to it from the National Small Business Association's website. To read the one policy that NLRB finds to be completely lawful follow that link to pages 22-24.

Here are just some examples of employer social media rules that NLRB found to be unlawful. Many are so because they potentially obstruct employees' rights to discuss wages and working conditions with co-workers.

Rule: Employees may not to use social media to release confidential guest, team member, or company information.

Rule: Employees must be sure that social media posts related to the employer are completely accurate and not misleading and that they do not reveal non-public company information on any public site.

Why it's unlawful: The term "completely accurate and not misleading" is overbroad because it would reasonably be interpreted to apply to discussions about, or criticism of, the Employer's labor policies and its treatment of employees that would be protected by the Act so long as they are not maliciously false.

Rule: Employees must check with the company's legal or communications team before posting information about the company to a social media site.

Why it's unlawful: Any rule that requires employees to secure permission from an employer as a precondition to engaging in activities protected under the National Labor Relations Act violates the Act.

Rule: Employees are forbidden to post photos, video, quotes or personal information of anyone other than themselves online without getting permission.

Why it's unlawful: In the absence of any further explanation, employees would reasonably interpret these provisions as proscribing the use of photos and videos of employees engaging in activities protected under the NLR Act, including photos of picket signs containing the Employer's logo.

Rule: Employees are prohibited from incorporating employer logos, trademarks or other assets into social media posts.

Why it's unlawful: Although the Employer has a proprietary interest in its trademarks, including its logo if trademarked, NLRB found that employees' non-commercial use of the Employer's logo or trademarks while engaging in protected activities would not infringe on that interest.

Why it's unlawful: The policy is overbroad because it would discourage communications among co-workers.

Rule: Employees may not use social media to comment on any legal matters, including pending litigation or disputes.

Why it's unlawful: This prohibition specifically restricts employees from discussing the protected subject of potential claims against the Employer.

Rule: Employees on social media should not pick fights and should to adopt a warm and friendly tone that will encourage others to respond to postings and join your conversation.

Why it's unlawful: The overall thrust of this rule could reasonably by construed to prohibit robust but protected discussions about working conditions or unionism.

Rule: Employees may use personal electronic communications to express personal opinions regarding the workplace, work satisfaction or dissatisfaction, wages, hours, or work conditions with colleagues provided that access to such discussions is not generally accessible to the public.

Why it's unlawful: The NLR Act protects employee communications to the public that are part of and related to an ongoing labor dispute.