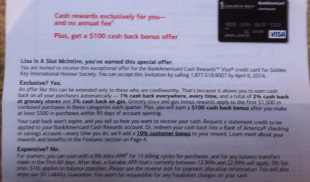 Bank of America was forced to apologize to a Bay Area freelance writer after a credit card offer from the bank called her a slut. The offer, received at her mom’s house, was addressed to “Lisa Is A Slut McIntire.”

Lisa tweeted out a photo of the offer on Thursday.

It's a credit card offer, apparently? I am still discomfited. pic.twitter.com/h1qGPtB15P

Then, she turned to Bank of America’s help Twitter handle, to try and sort out the mess.

Hi @BofA_Help. I just received a credit card offer from you that addressed me as “Lisa Is A Slut McIntire.” pic.twitter.com/7OeNZSlNhX

It took a bit to get a response, but while she waited, the story went viral, appearing on Gawker, the local news stations, and New York Magazine, among others. Finally, BofA responded.

@LisaMcIntire We’re incredibly sorry this happened and are researching now so we can take the appropriate action. ^bm

@LisaMcIntire We will follow-up with you ASAP. ^bm

@LisaMcIntire Please send us a DM with the best phone number to reach you so we may give you a call. ^bm

The credit card offer was sent to McIntire by Golden Key International Honour Society, which partners with businesses like Bank of America to send out offers. The society also responded to Lisa’s tweet, writing:

@LisaMcIntire Hi Lisa. We're so sorry this has occurred. We are investigating and will reach out to you personally soon.

Then, the call finally came from the bank.

On the phone with BofA right now…

All right, kiddos, gather around. I shall now tell you how I came to receive a credit card offer for “Lisa Is A Slut McIntire.”

McIntire then explained to followers that she received a call from Golden Key’s VP of Communications, who was able to find out that the “offensive language” was added to her account between 2004 and 2008. As she put it:

So it’s possible that I’ve been sluttin’ it up in a honor society’s database for almost 10 years.

Bank of America also apologized for the language, explaining that they flag “more traditional curse words,” but not “slut.” Showing that she has a sense of humor about the situation, Lisa added:

The moral of the story is: don’t do well in college, kids. You’ll end up on an honor roll whose database does NOT have a sex positive view.

While the companies are working to fix the mistake, they will probably also add the word “slut” to the list of flagged words.