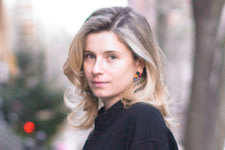 Alexa Hirschfeld is a something of a tech-entrepreneur celebrity for having founded Paperless Post in 2007 with her brother James when she was just a year out of college and he was still matriculating. At 29, she’s already made several “most influential women in technology lists” and she’s not even technically a technologist, just a digital native.

Now her company has evolved to serve customers who want something other than the virtual product it offers. What sets Paperless Post apart from other electronic invitation websites such as Evite is that the Hirschfelds conceived and designed their platform to cater to the formal invitation market, which had yet to transition online. In 2007, Hirschfeld says, “pretty much everything was going online, except there were some culturally important types of communication, like wedding invitations, that just hadn’t.”

Though many people she spoke to predicted that formal invitations would never shift from paper to electronic, she didn’t buy it. “The post office obviously wasn’t going to always be what it was, and it just doesn’t make sense to communicate over distance and have it take a month when it could take two seconds.”

She and her bother created a virtual stationery product that she says went “to the far end of the spectrum of being formal and ceremonial.” Their bet was that mainstream consumers want to communicate online with the fidelity of experience, self-expression, and gravitas of paper. Customers flocked to the site, ordering more than 100 million electronic invitations for important life events that demanded a ceremonial format.

They were proven right, but also wrong, as Hirschfeld explained at a technology conference in Tucson, Ariz., last week, in a panel discussion called The Limits of the Virtual. Quickly, Hirschfeld says, people wanted to know how to use Paperless Post to send printed thank you notes, greeting cards, and holiday cards. Physical cards were the top user request, she says.

She discovered that her customers like paper for its archival quality, and the statement it makes. For holiday cards in particular, she says, 85 percent of people choose to mail paper. “The card can go onto the mantle, and that means something to them,” she says.

So, last year, Paperless Post started offering printed stationery. “We spanned digital and physical,” Hirschfeld says. “It used our core competencies, like design and the design tool, so it made sense. It is different than when you go to a brick and mortar store and design the invitation with someone, but we are delivering physical pieces of mail to people.”

As an online company offering a virtual product, however, Paperless Post had already been able to collect significant social information about its customers. Says Hirschfeld, “We’re a digital product bringing people together physically in the real world. The data we have is interesting, because it’s important social data. You don’t friend somebody [on Facebook] and go to their wedding.”

She says 40 million unique people are in the Paperless Post network, and a lot of them have received a lot of invitations marking very important moments in people’s lives. “It’s really interesting to see maps of that kind of social data,” she says.

Conference panel moderator Gary Bolles, founder of eParachute, describes Hirschfeld’s company’s shift to paper as a boomerang effect. “You took something that existed in the real world, you made it virtual, you got information from your customers, part of which said, ‘No, we want to go back to something I can touch.’ But you’ve got so much more information now because you were digital. Because you have this direct communication with them, and your customers are telling you that they want this thing.”

Hirschfeld says that while online communication is still the company’s core competency and that its main focus—“self expression online and bringing important social messaging to the web”—is unchanged, the spectrum continues to paper. “Paper means more than what it meant before. To send a paper invitation to somebody, for whatever occasion, is making a statement.”

Today, she says, the core of Paperless Post’s revenue—and climbing—comes from paper. “Obviously, it’s a higher priced line item, but 60 percent of our users are asking for paper. It really does have a place in this world; it’s just a different place than it had before.”

For the full Limits of the Virtual panel discussion, see Techonomy13 conference coverage.