Mobile messaging apps or the social messaging market is not only growing, it is also becoming increasingly competitive. WhatsApp – the leader in messaging apps for a while now – has once again dominated the global mobile Android/iOS messaging app market, according to a survey carried out by mobile market research firm On Device.

A report by TC earlier in the day stated that even though the global messaging app market is quite fragmented with different messaging services doing well in different global regions, WhatsApp holds its dominance. Additionally, relative newcomer – to Android and iOS – BlackBerry Messenger (BBM) shows a positive growth sign. 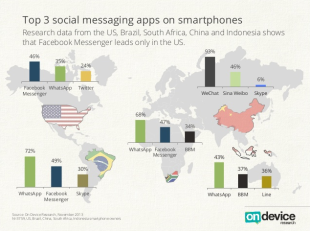 According to the survey carried out on 3,759 Android and iOS users in the U.S., Brazil, South Africa, Indonesia and China, WhatsApp is the leading app for social messaging in South Africa, Brazil and Indonesia, and second most popular in the U.S., after Facebook’s Messenger app. It has been also seen that the app has specially gained popularity in the 16-24 age group.

The other fact that came up in the study was that today with the proliferation of multiple messaging apps, users are trying out their hands on more than one app. Two main reasons that have come across –

While focusing on the US market, the report has provided interesting insights on China too. WhatsApp, that has found only 3% acceptance in the country, is dominated by the messaging app from Tencent – WeChat (known as Weixin). The app is used 93% times at least once in a week in the country. 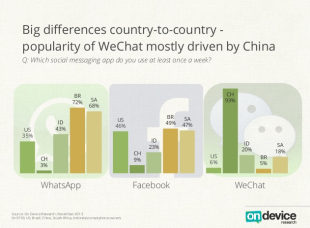 The messaging app that has more than 272 million monthly active users had recently shared that it is witnessing 100 million users from countries apart from China. While US is yet to adopt the app aggressively but Indonesia (20%) and South Africa (18%) users are using it weekly on their smartphones.

At the same time the study also highlighted that the recently launched BBM app has been seeing great adoption in countries like Indonesia and South Africa.

Messaging apps are not only growing in numbers but they are minting revenues too. Stickers or rich emoticons have been one of the strong sources and the study says it too. According to the study, Stickers is one of the prominent way, apart from that: in app purchases e.g. Line and subscription fees e.g. WhatsApp are the known ways too. The study also found out that while 40% of smartphone users have used Stickers, only 11% have paid for it once and 9% have done it more than once. The love for stickers is driven by China (31%) followed by South Africa and Indonesia. 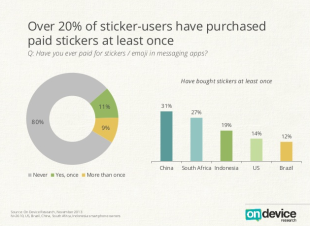 The survey may not be comprehensive since it misses out Europe and most of the Asian messaging apps are seeing major global traffic from there. India, which is also seeing a dominance of WhatsApp, WeChat, Line, Viber, has been missed out in the report. But the study clearly highlights the fact that users are preferring messaging apps over social networks.