5 Leadership Lessons from the Campaign Trail 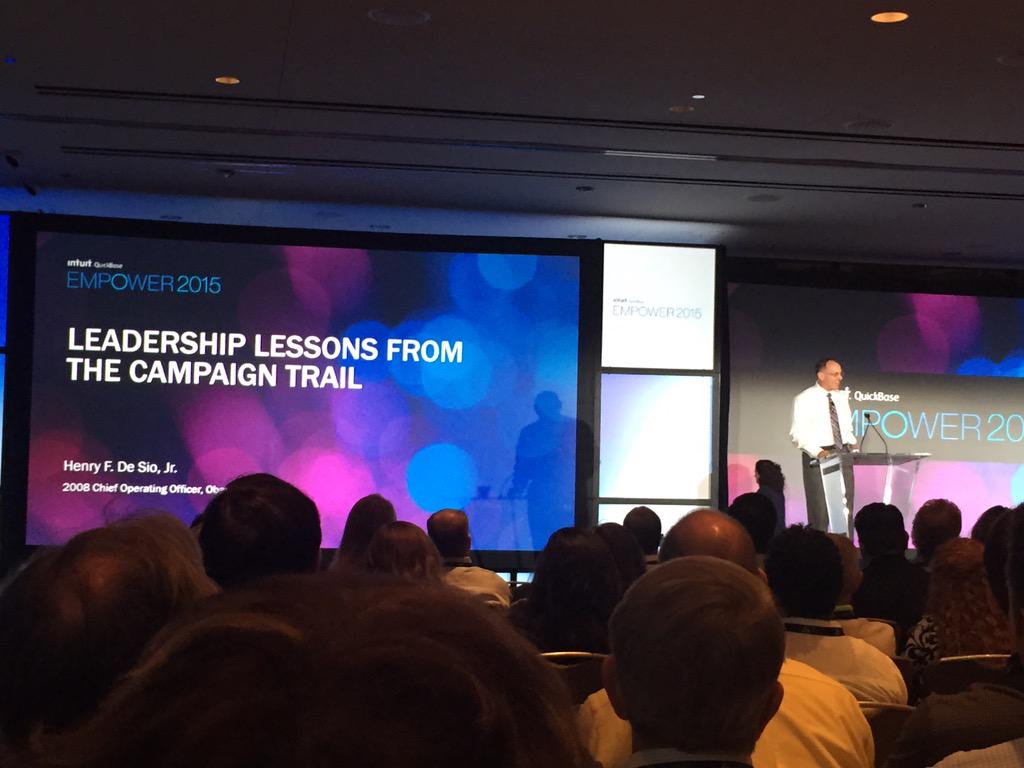 Veteran Fast Track readers know that my relationship with Intuit Quickbase goes back more than 5 years, So, you can imagine how thrilled I was to attend the brand’s very first user conference, EMPOWER 2015 here in Chicago, IL. I expected to leave with lots of productivity-related information – much of which I’ll share with you in the coming weeks – but the inspiration I received from today’s kickoff keynote was a welcome surprise. Henry De Sio is the author of Campaign, Inc.: How Leadership and Organization Propelled Barack Obama to the White House and is known for serving as the chief operating officer of President Obama’s epic 2008 campaign for the highest office in the land. De Sio credits a campaign organized around three principles – agreement, collaboration, and reliability – as critical to its ultimate success.

He also connects his many valuable campaign insights to the business world. “When a campaign starts up, it’s an entrepreneurial showcase,” he says. “Leadership is on display like on a reality show, and every action is open to full scrutiny and review. At the end, the best CEO wins.” Here are five lessons we can learn from De Sio’s political adventure.

The first employees of the Obama campaign, including De Sio, wanted everything to move through a proactive and efficient process. At the beginning, however, the system was tenuously held together by fax machines and human runners, and new people were put anywhere they could find an Internet connection and a flat space. When they moved into campaign headquarters, staffers were ripping Blackberries out of boxes and opening bank accounts minutes before they were paid by donors. Building the airplane mid-flight, they struggled to catch up. De Sio credits Intuit QuickBase as the red tape buster, helping the team to become instantly more productive. “I was in quicksand, and QuickBase was my lifeline,” he says.

Obama insisted his campaign build from the bottom up, be free from drama, and respect everyone. The candidate’s persona was of a hope and change-maker with a collaborative outlook, an entrepreneurial spirit, an innovative mind, and a service-oriented heart. From these factors, De Sio created the identity of his ideal team member: ambitious, competitive, hungry, personally motivated, and driven to make a difference – and not necessarily with a Washington resume.

De Sio learned that he must define himself in the moment, lest someone else do it for him. “You have to claim your frame,” he says. He also had to be prepared to recalibrate. For instance, in the campaign’s early days, De Sio was the quarterback, then a coach, and then a strategist. Refusing to be boxed in, he constantly re-assessed his positioning so that he was known not for his responsibilities, but for his possibilities. At the same time, an effective leader makes it clear that he controls his environment. “In a campaign, everyone wants to be noticed by the right people and sometimes they give in to their inner jerks. Without longstanding cultural norms, seeds of turmoil can form,” he admits. “It’s the manager’s job to get ahead of this.”

After an unexpected win in Iowa, an epidemic of smallness dogged the campaign. Instead of feeling proud, staffers were collectively depressed. They felt lost, like their individual needs weren’t being met. Travel bookers, for example, felt unappreciated. Although these managers of travel plans, certifications, and interventions were responsible for the third biggest line of the campaign’s budget, their co-workers did not understand the value they provided. De Sio pointed out all of the essential qualities the travel bookers brought to the campaign, including empathy, generosity, diplomacy, and kindness and prompted them to “own the role” as assistant CFOs.

Going into the campaign, De Sio believed in one leader at a time because that is the framework we’re taught. But after a stunning loss in New Hampshire, he realized that a siloed and hierarchical organization could not meet the campaign’s need for speed. He transitioned to an “everyone leads” approach, allowing junior and mid-level staffers to take control of their teams. This fluid system led to a streak of wins. “Innovation happens when a new team is assembled to solve a complex problem,” he says. “The old game is to stay in your own lane, while the new game is to bring all of your skills to any challenge and opportunity. You play in your position and past your position.”

This article was syndicated from Business 2 Community: 5 Leadership Lessons from the Campaign Trail