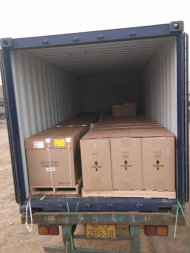 Oransi air purifiers in a shipping container in China

There are two remarkable facts about a consumer electronics product designed and manufactured by a 16-person startup called Oransi: it's American made, and it's selling like hotcakes in China. Oransi CEO Peter Mann expects to do $10 million in sales of his high-end air purifiers this year. Half of that revenue will come from filling up empty shipping containers going out of New York harbor. Oransi's Chinese distributors are trying to keep up with demand from homeowners there who are desperate to combat severe air pollution. Mann says the first 500 units he shipped to China sold out in 3 days.

Mann, 47, is a former Naval officer who held executive positions at Tech Data and Dell before starting, and selling, his own high-end appliance e-commerce company in Austin, Texas, and then investing $200,000 in 2010 to make a business of building hospital-grade residential air filtration systems. He conceived the idea when his infant son was battling life-threatening asthma and every system he tried proved ineffective. Mann and his team designed a purifier that, he says, has “up to 39 times more filter media and uses 90 percent less energy than any presently on the market.”

Not only is the Chinese clean air market an enormous opportunity, but also it’s an economically expedient one for Oransi. For one thing, container space is so widely available in China-bound ships that it costs less to export the 75-pound wheeled purifiers than it would for Oransi to move them around the U.S.—about $20 each for global shipping versus $50 just to truck a unit from a Pennsylvania warehouse to Connecticut. Plus, demand is so high in China that purifiers presently selling for $1,295 to $1,500 in the U.S. demand a retail price of $2,000 to $3,000 in China’s luxury department stores.

Why not manufacture the systems in China if half the market is there? “We looked at making it in China,” Mann says, “but it wasn’t any cheaper.” While the air purifier’s motor is German, its filter, fan, and circuit board are U.S.-made. “The equipment is so advanced, we couldn’t get the same quality from China,” Mann says. “For us it turned out that the U.S. was the best place to make it: We have more control over the product, and if we need to make adjustments and tweaks it’s easier to do that here.” 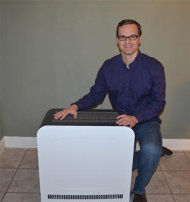 Indeed, Mann says there are more than 10 manufacturers in China serving the low-end of the clean-air market, but he has no competition at the high end. Other polluted countries, such as India, have yet to latch on to the idea of purifying in-home air. But Mann says market research indicates the Chinese market, which started booming when the U.S. embassy there began reporting air quality statistics two years ago, will grow 34 percent annually for the next 3 to 5 years.

Oransi is “cranking up” to meet the demand, he says. “We’ve introduced some new products and different configurations and expanded distribution to drive sales. And we’re looking to introduce one or two more products this year that would be closer to mass market.”

As for fears that Oransi knockoffs will emerge in China, Mann says, “It’s a risk that’s out there. We’ve done what we can with patent and trademark protection. Someone could try and make something similar in China, but our unit is fairly hard to make. It’s a high-end premium luxury product, and people in China know where it’s made.”

Anyway, he adds, “There’s plenty of room for everyone. It’s an exploding market.”