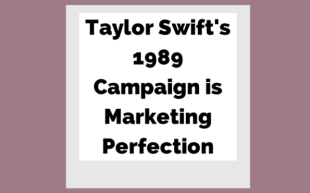 Every two years, Taylor Swift releases a new album, and the world loses its mind. And it’s awesome, particularly from a marketing standpoint.

You might not be a die-hard Taylor Swift fan, but marketers of all music preferences should follow her 1989 album launch with rapt attention. At just 25, Swifty has more marketing tricks up her sleeve than even the most seasoned professional. And she knows how to use them. Her new album is projected to sell more than 900,000 copies in its first week, making it the second-highest selling album of the year.

Here’s how T. Swift strums up buzz for her album months in advance, along with tips for how you can adopt her marketing strategy to fit your clients.

Swift announced 1989 more than two months ago on a special Yahoo! livestream, along with the album’s first single, “Shake It Off.” The video for the song came out a few days later. Worldwide hysteria ensued.

Marketing Lesson #1: Don’t wait on media coverage; make your own. The easiest way to do this is through your company blog, but don’t just crank out 500 words and call it a day. If you want to truly generate excitement about something, think out of the box. Publish a video or infographic; even better, create a campaign that incorporates multiple types of content. If you do it right, media and other bloggers will be dying to cover your story.

From #TS1989 to #5HoursUntilOutoftheWoods, both of which trended worldwide, Taylor understands the importance of social media (even if she’s admitted that hashtags confound her). She’s also increased her social presence, joining Tumblr just over a month before her album launch. (Coincidence? Of course not.)

The best part of Swift’s social presence is that it’s all her; she doesn’t rely on a team to construct perfect images or posts. In fact, she made everything used in her album promo photos, which included lyrics from yet-to-be-released songs. It’s that type of personal touch that make her social media followers so loyal

Marketing Lesson #2: Don’t treat social media as a chore. It’s meant to be fun! Try out new channels, and don’t be afraid to admit you aren’t quite sure what you’re doing. Reminding your followers that there are humans behind your account will make them more likely to relate to your brand.

From Lena Dunham to Ed Sheeran to Lorde, it seems as if every major celeb tweeted out love about 1989. Oh, yeah, that might also be because these heavyweights are some of Taylor’s best friends. The same goes for her brand endorsements with Diet Coke and Target. Both companies released commercials featuring Swift, along with snippets of new songs.

In both cases, with her friends encouraging others to buy her CD and her industry partners sharing special content, Swifty massively increased her audience reach while simultaneously establishing credibility for 1989 and getting consumers excited about her new songs.

Marketing Lesson #3 – Build relationships with other agencies/marketing professionals. You never know when you might need help, or when you can help someone else. Also, forming partnerships can increase your audience reach and open the door to marketing opportunities that wouldn’t otherwise be possible.

This is perhaps one of the best aspects of the album’s entire marketing campaign. Swift invited hundreds of people to her five homes (89 per session) to listen to her album prior to its launch. Taylor understands more than many celebs that her fans are a significant portion of her success, and this is a great way to thank them. They got to hang with Taylor and take photos with the superstar, giving them a truly once in a lifetime experience.

Marketing Lesson #4 – Of course, you probably don’t want to invite people to your home, but consider something like a customer appreciation lunch. You can have it at your office or rent out a space. Just remember to thank your customers for their loyalty every now and then. It will do more than you think.

Exclusivity is the Name of the Game

Swift has said in interviews that 1989 lived on only her phone for about a year and a half because she was so concerned about leaks. Her paranoia might seem a bit extreme, but she understands the importance of giving her fans something exclusive. Her record label is also adamant about keeping bootleg versions of new songs off the Internet and, when someone leaked the deluxe version of 1989 a few days before its release, it was taken down in hours.

Marketing Lesson #5 – Of course, this is relevant if you have clients excited about a new product or service offering, but you can also associate this rule with content. Creating custom content for your client’s is crucial to building a loyal audience. If you post the same “5 reasons why…” post, consumers aren’t going to have any incentive to choose your content over a competitor’s. Dig deep when you’re creating your editorial calendar and come up with ideas that are unique and exclusive to your clients.

This article was syndicated from Business 2 Community: Taylor Swift’s 1989 Campaign Is Marketing Perfection