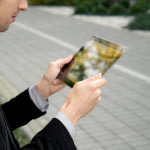 Tablets: Key Productivity Driving Devices or ToysIt has been over four years since Apple released the first version of the iPad and the tablet is still yet to find its true purpose in the device ecosystem. What was once marketed as a device to sit between the smart phone and laptop, because of its ability to improve internet browsing, video viewing, photo sharing, and gaming, is struggling.

Phones are continuing to grow in size and laptops are continuing to get lighter and thinner so that carrying them around is no longer such a burden. With phones becoming more like phablets, there is a definite question about just what market tablets will be able to serve.

Tablets have also gone through a period of trying to make themselves relevant inside the workspace, which has been successful to some extent in certain industries. The key problem stopping widespread adoption is still that they are only supplemental to laptops and smartphones and will never be able to replace either of them. For many companies, cost of tablets is also a barrier to adopting the device, as the thought of providing yet another device to employees will only mean more pull on already stretched infrastructures and budgets.

Despite all of this I do believe there is a place for tablets, after they make a couple of key adjustments in their go to market strategy. One thing that the iPad and other tablets need to start focusing on is not being even bigger phones without a phone function. By that, I mean specifically they need to start differentiating the experience to hone in on what they can be best at. I will likely never write my life story on a tablet; however I would create and tweak documents or PowerPoints on one while I’m heading on a business trip.

A lot of what is wrong with tablets actually has nothing to do with the device themselves but has more to do with how software is taking advantage of tablets. When I use a tablet I’m not looking for a really big smartphone app, I want to be able to use different gestures because there is a pretty good chance I’m actually sitting down or at least standing still when using a tablet. Most software, including the OS itself, is failing to take advantage of the different use cases because a tablet is not quite an everywhere all the time device like a smartphone, but also not a sit down device like a laptop. Tablets sit in the space of someone who is mobile but will likely be stationery while actually interacting with the device and is looking for convenient access with better experience and interaction.

The tablet market and the software around it will require some additional time to mature before the true places of these devices can be found. I don’t think Apple’s latest release of iPads is quite making that next step, but with that said I do expect them to be around for quite some time and believe that in the future they will be an essential part of the ever growing device ecosystem.

For more on the topic of mobility, read the Aberdeen report The Increasing Costs of BYOD