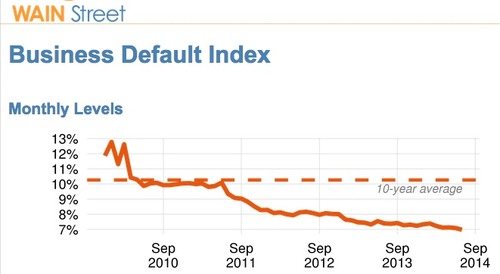 As borrowers, small businesses are relatively safe bets, and the very smallest businesses have the best credit performance of all, according to financial analyst Vidur Dhanda.

Since December 2009, Dhanda’s company WAIN Street has published a monthly index that gauges defaults by middle-market and small business enterprises in a variety of sectors and geographic regions.. Right now, Dhanda says, his company’s Business Default Index, which tracks more than 18 million US businesses, is at an all-time low in its four-and-a-half-year history.

The index aggregates credit performance indicators  such as bankruptcy and delinquency. Heading into the second half of 2014, the index recorded a default rate of 6.98 percent —a 0.11 percent improvement over the first half. Dhanda explains that an increase in the index, which is quoted as a seasonally adjusted, annualized default rate, corresponds to deterioration in business credit quality. Among sectors, manufacturing businesses have the lowest default rates of all, at just 3.2 percent.

An associated WAIN Street tool, the Diffusion Index, measures the degree to which the change in default rate is spread throughout businesses. Dhanda says that index showed in July that credit performance improved and deteriorated for nearly equal numbers of businesses, painting a “positive picture of decrease in losses incurred by lenders.”

Dhanda notes that his indices align with a research recently published by Experian/Moody’s Analytics, but adds, “WAIN Street’s data is more timely and more granular” with monthly reporting and data broken out by state, industry, and business size. WAIN Street’s complete August 2014 report with business size-based sub-indices and detailed industry sector and geography breakouts is available at the WAIN Street website.