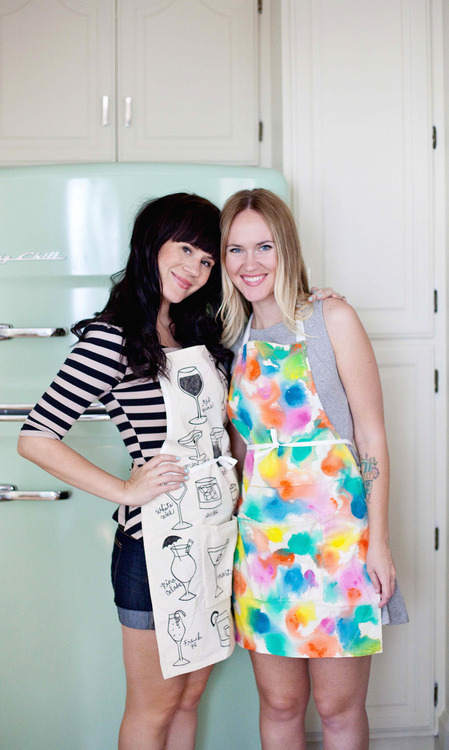 Entrepreneurs Elsie Larson and Emma Chapman have turned a beautiful mess into a pretty penny. Their business? “Creating happiness through a homemade lifestyle.”

Riding the DIY crafts trend, the enterprising Missouri sisters draw more than 1.8 million monthly visitors to their blog, A Beautiful Mess, where they offer chatty posts about DIY projects, recipes, what they’re wearing, and what they want to do. For income, they leverage the blog to sell seats at online design classes, subscriptions to monthly stationery packages, their own books, and scrapbooking supplies, paper products, iPhone covers, collections of Photoshop actions (photo-editing time-saving tools), and their popular Photoshop app—it’s been downloaded more than 1 million times. Their main revenue stream, however, comes from outside advertising that is streamed on the blog.

Previously the sisters owned a brick and mortar vintage retail shop in Springfield, Missouri, and blogged just to move products out the door. But as they spent more time on the blog, they spent less in the store, so they closed shop and shifted their focus to the digital world. Though they say they were heavily in debt when they kicked off A Beautiful Mess in 2010, they now employ 5 full-time staff and several freelancers, have a partnership with a Kentucky design studio that creates branded products for their site. In 2014, the sisters celebrated their second $1 million year.

How did they do it? Yahoo Small Business chatted with Elsie, 32, and Emma, 28, about their success in the digital business world.

Yahoo Small Business: Why were you in debt back in 2010?

Elsie & Emma: We were heavily in debt. The first couple years we started our business we got really behind on our taxes and it wasn’t making a profit. It took a year to get out of debt, then another year to start making good money.

YSB: How did you do that?

E&E: Blog advertising and the app have been game changers along the way, and course tuition has been a steady thing we have relied on for 8 years. The big change was when we decided to focus on having multiple revenue streams. We viewed it as a way to recession-proof each of the streams and to be able to pay our bills. That has made a big difference for us. Plus some luck and a lot of hard work.

Now that we have our strong core, we try to add on one new revenue stream every year. When we do, it’s a good year. But it can still take a few years before you make it happen.

This year, we’re not doing any big changes. We’re trying to iron out what we already have and go more smoothly. We’re simplifying a little bit. That’s usually not our motto, so it will be refreshing.

YSB: Have investors helped you get the business off the ground?

E&E: We had a loan once, but we have never had an investor other than our Dad. And now we do reinvest in our own business over and over.

YSB: Your site has distinct photography that really pops off the page.

E&E: No one on our team is a professionally trained photographer. (Emma was a philosophy major in college, Elsie skipped college to go into business.) We’re self taught, but we keep it consistent even though it is done by 10 people. We put together a folder of images every season and try to keep photos of recipes and projects in that wheelhouse. We have tons of backdrops at our office and we use natural light.

YSB: Where do you believe your creativity came from?

E&E: Our grandpa owned a furniture shop, and Mom was an art teacher—that had everything to do with creativity and making a big mess while trying to run it as a business.

YSB: Are there drawbacks to working with your sibling?

E&E: It’s great working with your sister. Our thing is that we recognize that the other person has different strengths and we aren’t constantly competing. For the most part we trust each other and get out of each other’s way. That enables us to do a lot more than we’d been able to do on our own. We put up with the hurt feelings when they happen because we can say, “I value this person.”

YSB: How did you reel in nearly 2 million readers?

E&E: It didn’t happen all at once. We went from 20,000 to 50,000 to 100,000. A lot of major things that have happened that have brought in readers, but the biggest is doing shareable content—recipes and DIY—really consistently. We have more than one go up in a day and with the popularity of Pinterest and things like that, people share it.

We don’t pay for advertising for the blog. We never have. We wouldn’t have been able to afford it when we were starting. We only do food and craft and that type of lifestyle content. So we find resources for people interested in that and we put it in our own voice. For us, it’s important that the site is useful and fun to read.

YSB: Does one social media channel generate more traffic for you than others?

E&E: We spend the most energy on Instagram. Our brand is very visual, so that’s an avenue that does really well for us. But we also use Twitter, Facebook, and all the major sites.

YSB: Who are your readers?

E&E: Based on our reader surveys, they’re 99.9 percent women, mostly ages 18-32, and they like crafts and cooking.

YSB: Were you striving to capture the DIY movement?

E&E: Our blog was one of the first that really focused on food and DIY together. But it’s one of those things that is hard to answer. It’s what we’ve always been into. It happens to be more popular right now.

YSB: Do you still have time to do your own DIY projects?

E&E: Yes, several times a week. Whenever we move houses or offices we have more to do. And we just purchased a small, run-down house in Springfield that we’re renovating and decorating. We will blog about the process and once we’re done we will donate the house and everything in it to our local Habitat for Humanity affiliate.

YSB: What entrepreneurial advice would you give to other digital startups?

E&E: We’re not afraid to quit something that’s not working. Some people will say, “never say quit.” For us it’s OK to quit; quitters win big. Some of our ideas have failed, some have been successful. The other ones we barely remember. It’s about not putting all your eggs in one basket, and not being afraid to try something new. When we did our first app we knew there was a greater chance we would have a bad outcome than a successful one, but we did it anyway. It has helped us a lot.

YSB: What’s been the toughest part about starting and running your business?

E&E: It was hard to juggle. Nowadays we have more staff than we did at the beginning and it helps a ton to know “this person is on it.” In the early days we didn’t have full time people and it was pretty stressful. But we always had an end-game goal: If we get far enough, we can to retire to an island.