Samsung is getting smartphones to cure cancer while owners sleep 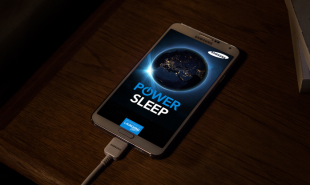 Considering how useful smartphones are, there’s still plenty of untapped potential. Locket has already gone some way to earn smartphone owners cash by turning their lock screens into ad space, and now a new app called Power Sleep harnesses the computational power of the devices to crunch data at a time when they’re otherwise not in use.

Cancer researchers at the University of Vienna find themselves with masses of protein data that they can’t sift through themselves — instead, they rely on computers to process it over long periods of time. To get the job done more quickly, the Power Sleep app developed by Samsung Austria is hoping to crowdsource computing power from the processors inside people’s smartphones. Many already use alarm clock apps that require their phones are kept running throughout the night and Power Sleep doubles as a replacement for those apps. Users simply set the alarm and the phone then begins to collect packets of data containing protein sequences from the university, compares them, and sends the results back to the lab. Currently available only for Android, the app is free to download from Google Play. The video below offers some more details about the app:

Power Sleep is similar to existing projects such as Stanford’s Folding@home and UC Berkley’s BOINC, whose technology the app is actually based upon. Are there other projects that could utilize the combined power of otherwise idle smartphone networks?