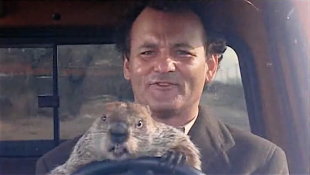 Punxsutawney Phil went into hiding today after telling the world that there will be 6 more weeks of winter this year. Some will say that the Phil crawled into a hole after his Groundhog Day prediction because, well, he’s a groundhog. But I think that the prognosticator of prognosticators, the seer of seers, might be fearing for his life.

That groundhog can go crawl in his hole and die for all I care! #PunxsutawneyPhil #NeedWarmWeather

Normally, I wouldn’t take these threats too seriously. But this isn’t the first time that Punxatawney Phil has received death threats. One man even came dangerously close to killing the groundhog back in 1993.

Bill Murray never successfully killed the groundhog but he wasn’t the only one to try. Last year, Butler County Prosecutor Mike Gmoser issued an indictment against Punxsutawney Phil for years of inaccurate weather predictions.

Gmoser said: “(Phil) purposely, and with prior calculation and design, caused the people to believe that Spring would come early.”

Which, in Ohio, is apparently punishable by death.

Punxsutawney Phil managed to escape death last year but he may not be so lucky this time around.

Why did you have to see your shadow Punxsutawney Phil? Stupid rodent, I want to strangle you.

Who wants to take a trip down to Pennsylvania to murder Punxsutawney Phil? Those polar vortexes just weren’t enough you furry little shit?!

On the bright side, a surprisingly large number of people were able to correctly spell Punxsutawney this year. So that’s nice.