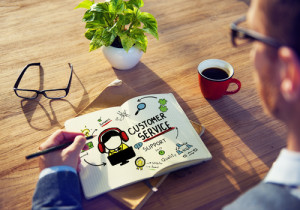 You know social media is important, and you’ve no doubt discovered just how detrimental it can be to your company to simply ignore the status quo. After all, according to Upwork, 70-90% of all of your customers use it. Though you may only utilize its features to get your company’s information across, don’t neglect the customer service haven these outlets have become.

Some generations don’t really “get” social media, seeing it as narcissistic and not deserving of an investment in company resources. However, it’s those companies that did realize the change and learned to develop their standards to it that have continued to thrive. Yet beyond simply updates about product releases, the smart companies immediately reconciled how social media affects customer approval through the customer service provided on Facebook, Twitter, Instagram and even Tumblr.

As you make the switch to a social media focus that is based on increasing your service to your customers, it is imperative that you also shift how you view response time. Upwork recently linked to a study that found that almost 50% of all social media complainers expect a response within 60 minutes while almost 35% expect one in only 30.

While past generations of communication, such as regular mail, fax and e-mail, basically lent themselves to response times hovering in the days to weeks category, the rapid fire communication made normal by social media has also shifted how consumers expect to be treated by companies. Instead of being a major corporation, when you are on social media, you are expected to act just like everyone else on social media. There is no leeway for those that abuse this method of communication.

The gravity of this can be found in countless PR successes and nightmares brought on by immediate action versus delayed reaction. Walmart alone boasts a Facebook response time average of 28 seconds. This quick response time is hardly absurd, especially in a world where something can go viral in an extremely negative way after only a few hours of existence.

Take the Stephen Colbert incident that took place last year. His show’s Twitter posted a reference to that day’s show. Due to sarcasm not translating well for a medium restricted to 140 characters, a barrage of #CancelColbert tweets started compiling as those not in on the joke became more and more upset. Finally, hours after the damage had been done, Colbert and the show’s executives went into clean up mode. Had they been diligent from the outset, the entire snafu could have been avoided entirely.

All too easily we think we can just hide behind a relative mask of anonymity, letting go of our humanity because of the internet personality we give ourselves. Because of this, we also often forget that the other side of a social media account is a human. Though you can’t control how customers act no matter what medium you have to deal with them in, you can control the connection you make.

If a customer is having a really hard time, do what you can to empathize with them publicly while inviting them for a private, direct chat line to see to their problems. This movement from public to private is a way to express just how seriously you take fixing their problem. Treat everything they say with the significance they perceive it as having, even if it doesn’t matter to you one bit. All they are looking for is to be validated and have a correction made. That’s it. The more you treat them with calm respect, the more you show you really do care about their problem, the easier it will be to come to a successful resolution.

A really important way to make this human connection across an inhuman medium involves using their name once you’ve transitioned to the private messages. It forces them to reassume their actual identity and to drop the act they put on for internet attention. After all, nowadays, only really close friends ever really know and use our first names regularly, making one’s name even more poignant.

Social media in the right hands, it is an effective, fast means of finding a mutual resolution to a problem without having to wait around. In a world where time is becoming increasingly more precious, the faster issues can be resolved, the happier everyone is.