How to Get Your Ideas to Go Viral 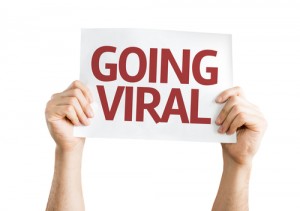 Speaking in front of any group of people is truly nerve-wracking. You may question whether you’ll remember everything you wanted to say, or get so overwhelmed that you completely forget major points. You may loose sleep over whether the audience will be receptive to your ideas.

Many people have great ideas but few bring them to the masses and are able to execute them so others can benefit from them. Too often we give up on our ideas and assume that success is for other people, those who are  smarter, more connected, more capable or financially secure. The truth is that great ideas only get known to the masses when they are properly presented and when influencers help spread them.

Nancy Duarte, author of the recent HBR Guide to Persuasive Presentations, says that the most powerful device known to man is an idea. “A single idea from the human mind; it can start a groundswell, a flashpoint for a movement, and it can rewrite the future”. But, an idea is powerless if it stays inside of you.

Changing the world starts with a compelling story

The most effective way to convey an idea is through a story. There’s something captivating about a story structure that makes it so that when it’s well constructed it can be ingested and recalled by the person receiving it. Duarte says, “When a story is told, the heart quickens. When a presentation is told, the heart flat-lines”. Her research  addresses the question, Why do we sit with rapt attention at a story, but are bored with a presentation?

Stories have a definite shape: Great Communicators use this shape

Duarte says that a great story has an arc that starts with a beginning that paints a picture of the audience’s current world, then what could be, back to what is, and then what could be until theirs what she refers to as a new bliss. This is the turning point in the story where something unexpected happens that surprises and involves the audience.

How to captivate an audience

Take the time to understand your audience’s perspective and develop all your material from a place of empathy toward them. You’re asking them to adopt your idea, which means they may have to abandon a belief they hold as true — and that’s hard. So, know your audience — imagine what it would be like to be them. What are their biggest worries? What are their biases that could cause them to resist your message? How do they prefer to spend their time?  What do they read, what music do they listen to, who are their influencers? Most presenters are pressed for time and prepare their content rapidly, which results in making the material about their own narrow perspective. By switching that paradigm to an audience-centric approach, your material will resonate and the audience can feel a deeper connection to you and your material.

Duarte says, you need to understand your role in the presentation. So many people feel like they’re the central figure — kind of like the hero of the story — because they’re the one talking the most. But in reality, your role is that of a mentor — you should be giving the audience a magical gift or a special tool, or helping them get unstuck in some way. You have to defer to your audience. When you put your idea out there for an audience to contend with — if they reject your idea, your idea will die. You have to think of it as, “The speaker needs the audience more than the audience needs the speaker.” Then you’ll start to approach a material with your audience in mind – you’ll have more of a stance of humility than one of arrogance. That will help you create the kind of movement needed to get your idea to spread.

And then she points out the importance of wrapping your content in story. “A story serves like the sugarcoating on the outside of a pill in some ways — it just makes it go down easier”. If you look at preliterate generations for thousands and thousands of years, stories would pass down from generation  to generation  and stay almost completely intact. Yet, a lot of people can’t remember the last presentation they sat through. So, using principles of story — the tension, build up and release that happens in a story — that’s what will help persuade the audience toward your idea.

What is the best way to start creating a presentation?

Duarte advises not to not start in PowerPoint. Presentation tools force you to think through information linearly, and you really need to start by thinking of the whole instead of the individual lines. I encourage people to use 3×5 note cards or sticky notes — write one idea per note. I tape mine up on the wall and then study them. Then I arrange them and rearrange them — just work and work until the structure feels sound. And from that sound structure, you start to fill it in using a presentation tool.

Ted Allocca, trends manager at YouTube says that videos go viral once they’re picked up by what he calls “tastemakers”.

Tastemakers, creative participating communities, complete unexpectedness, these are characteristics of a new kind of media and a new kind of culture where anyone has access and the audience defines the popularity. For example, Justin Bieber, got his start on YouTube. We all feel some ownership in our own pop culture and as participants we shape who becomes famous based on what we share.

Last year, Bear Vasquez (better known as Yosemite Mountain) posted this video that he had shot outside his home in Yosemite National Park. In 2010, it was viewed 23 million times. He just wanted to share a rainbow. Prior to this post, he had posted lots of nature videos that didn’t go viral. This video had actually been posted almost a year before it got noticed. So what happened here? Jimmy Kimmel posted this tweet that would eventually propel the video to be as popular as it would become. Because tastemakers like Jimmy Kimmel introduce us to new and interesting things and bring them to a larger audience.

Making a great presentation and making ideas go viral go hand and hand. You need to believe in your idea, know your audience, pull them in so their interested and then be lucky enough to have a tastemaker notice your idea so they share it with a larger audience. Through the audience’s generosity of sharing, your idea could spread and become useful to the masses. That is if you have the interest in tuning into what interests your audience and presenting so they want to hear it. No one needs to give you a green light to create a video that goes viral. If you create enough of them and they peak the interest of an influencer, you too could become the next sensation.