The online freelance marketplace Elance-oDesk says activity on its site shows there is an “exploding demand for cloud-based customer service, UI design, and mobile development.” 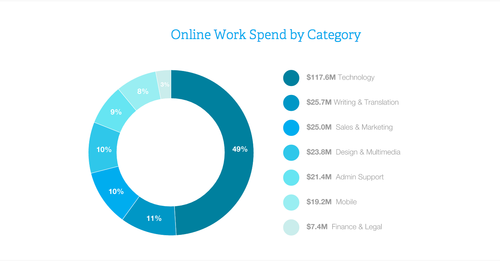 The company’s Global Online Work Report and a U.S. Online Work Report share Insights drawn from its own user data, which it claims is “the biggest repository of freelance work data available.” Elance-oDesk says its database provides a view into the workings of “a real labor market”—data covering the full work lifecycle, from demand through payment, including number of job posts, hours worked, and actual earnings of its members.

“Freelancing is on the rise around the world,” Rich Pearson, SVP of Categories and Geographies at Elance-oDesk said in a statement. “Businesses tapping into freelance talent via the Internet are approaching $3 billion of cumulative spend via Elance.com and oDesk.com—and we’re still in the early days of online work.”   He cites a Freelancers Union report that says 53 million professionals are now freelancing in the U.S. alone.

Elance-oDesk estimates that freelancers will earn more than $900 million in 2014 via its platforms, which have been tapped by 3.7 million businesses and 9.3 million freelancers via the Internet.

Elance-oDesk also reported these trends in third quarter of 2014:

·Companies hiring through Elance-oDesk spent $117 million on technology jobs, making it the largest category for hiring and almost half of all spending in the quarter on the site.

·  The cloud-based customer service category grew more than 30% over the year.

The fastest growing tech positions, based on year-over-year Elance-oDesk freelancer earnings growth, include:

Among mobile projects, Elance-oDesk reports that demand was highest for developers specializing in iPhone and iPad programming, JavaScript, Android and Objective C.

“At the local level, there is not nearly enough STEM talent to feed the demand,” said Pearson. “We see this especially with emerging skills like Swift, the new programming language developed by Apple for iOS and OS X development. If companies want to keep up, they simply must think bigger—and many are already doing so as seen by growth in freelancer earnings in the U.S., Russia, and the Philippines of more than 25% year-over-year.”

As for cloud based customer service, Elance reports that software-as-a-service tools and highly qualified online talent are now enabling even small businesses to keep up with demands around the clock. The platform saw a 145% growth in hiring for virtual assistants, 85% growth for Technical Support, and 61% growth for Telephone Support.