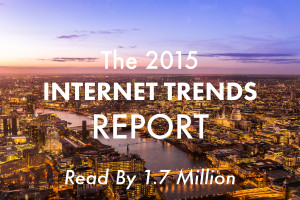 On May 27, KPCB dropped their 196-page 2015 Internet Trends Report. It’s huge. And it’s smart. If you have the time, this is definitely on our BuzzPlant recommended reading list. If you don’t have the time to skim over the 196 pages, well, we’ve got the at-a-glance highlights for you. Without further ado, let’s dive in and discover the latest 2015 internet trends… While the web has had tremendous impact on consumers, it has – by comparison – barely broken into education, healthcare, and government/regulation/policy thinking, according to KPCB.

New Ad Formats Are Optimized for Mobile
Between Vessel’s five-second ads, Pinterest’s cinematic pins, and Google’s local inventory ads, advertisers have a lot to be excited about. Micro-moments, hyper-local advertising, and creative video advertising are some of 2015’s biggest marketing trends. Also, Twitter, Facebook, and Google are all integrating ‘Buy’ buttons into their platforms in order to minimize friction at the moment of interest.

Video Goes Vertical
While our big screens are horizontal, an increasing amount of our time spent watching videos on mobile occurs in vertical orientation, which is changing the way content creators think about how and what they shoot.

Where you see the internet headed this year?

This article was syndicated from Business 2 Community: The 2015 Internet Trends Report Read By 1.7 Million