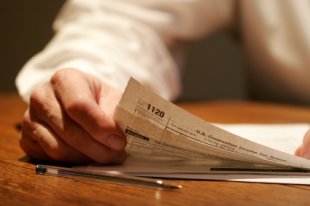 Notable Changes in 2013's Tax LawWhat taxes will go up and what kinds of tax breaks for small business can you expect to see extended in 2013? We did the legwork for you today on notable changes you can expect to see for 2013′s tax law.

For some, Income Taxes will go up in 2013 – Small businesses that have a pass through structure – an LLC, S-Corp, Partnership, or Sole Proprietorship – may be affected by the increase in income tax as whatever profits the business takes in translates into their income. However, this will only affect those in the highest income bracket.

For some, Medicare Tax will go up in 2013 –Employers should be aware that, along with the standard Medicare tax withholding of 1.45%, they must withhold a .9% additional Medicare tax from any income in excess of $200,000 that is earned by an employee, Unearned income is also affected by an increase in the Medicare tax rate – if an AGI is over $200,000/yr for someone filing individually, or $250,000/yr for a married couple, a 3.8% Medicare surtax will be levied on any unearned income.

Changes to the 2013 Tax Code might affect businesses that file a quarterly 1040ES – If you file a 1040ES, remember to take these changes into account when determining how much to withhold every quarter. Sole proprietors, partners, S-Corp Shareholders, and self-employed individuals must file quarterly estimated tax payments if you expect to owe more than $1,000 in taxes when filing your return. The IRS has not released the tax rate schedule for 2013 yet, but when they do make sure to review it carefully as your rates may have gone up. You could face fines if you underpay.

Calculating a Home Office Deduction is Simpler – Claiming a deduction for a home office used to require business owners to take precise measurements, perform complex calculations, and fill in 43 lines of information. Happily, the IRS has unveiled a simpler option for 2013, and all it requires is that the person claiming the deduction multiply the square-footage of their home office by $5 – the maximum deduction is $1,500.