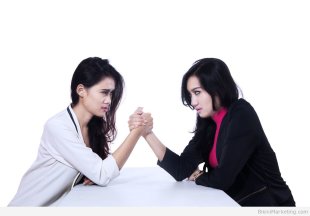 Mobile marketing is without a doubt having a moment right now, and there are no greater competitors in this field than Apple and Android. The two tech giants are known for trying to outdo each other, and each have their own dedicated camps of supporters.

The truth is, neither one of the brands is better than the other, they simply appeal to different demographics. Rather than concerning themselves with the rivalry, Bikini Marketers should instead focus on their mobile marketing goals. Once you know the results you want, you can use the following information to craft a mobile marketing strategy that includes both iPhone and Android users.

iPhone Spending Outpaces AndroidAdTruth surveyed 700,000 smartphone users in all 50 states from Jan. 1 to June 30 of 2013 to determine the most popular operating system for mobile shopping. It found that iOS beat out Android in 43 states. Apple’s operating system accounts for 57 percent of mobile commerce compared to Android’s 43 percent stake.

Just so you know, 20.3 percent of Americans use Android phones compared to the 16.9 percent of the population that uses iPhones.

It’s All About Demographics
These numbers might seem like devoting your mobile marketing budget to iPhone users is a no-brainer, but that would be a mistake. The real numbers you should pay attention to are the demographics of each phone’s users.

The Pew Internet and American Life Project surveyed 2,076 cell phone users to determine who was more likely to own an iPhone or Android.

The survey found that Android users account for 28 percent of all cell phone owners and iPhone users make up 25 percent. Males are more likely to use an Android than an iPhone (31 percent to 24 percent, respectively) while females don’t seem to have a preference (26 percent for both phones).

When it comes to age, consumers from 18 to 24 are the most likely to choose Android over iPhone (43 percent to 31 percent, respectively). In fact, every age group up to 54 prefers Android, while those 55 and older favor iPhone.

In terms of income, consumers who make $75,000 or more annually report having an iPhone while those who make less prefer Android.

When it comes to education, those with a college degree are the group most likely to have an iPhone (38 percent compared to 29 percent with an Android), while people with a high school degree or some college credit prefer Android.

So, what does all this mean?
The message in these numbers is to first think of your target market, and then decide how to allocate your mobile marketing budget. Do you want to reach young professionals fresh out of college or their parents? Having a clear idea of who you want to reach will help you better understand which mobile system you should use for your marketing campaigns.