How Mitch Goldstone’s lawsuit could be your gain 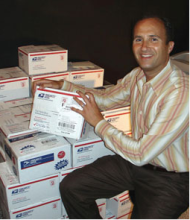 While politicians have been arguing over who's doing more for small business, one independent businessman with no campaign agenda has dedicated the last seven years of his life to pursuing a lawsuit advocating for merchants like himself. Mitch Goldstone, the CEO of ScanMyPhotos.com, became a small business hero last week when he won a $7.25 billion settlement—the largest private antitrust settlement in U.S. history—that promises to put large sums of money back into the pockets of millions of businesses that accept credit cards.

Goldstone, of Irvine, Calif., was the lead plaintiff in a class action lawsuit filed in 2005 that alleged that Visa and MasterCard illegally fixed interchange fees—the so-called swipe fees that U.S. merchants pay the card companies for the privilege of accepting consumers' credit payments.

Yahoo! SBA: This is a real David vs. Goliath story. How did it start?

Goldstone: At ScanMyPhotos.com I had been charging $5 to digitize pictures using antiquated technology. When I started using high-speed imaging scanners I was able to charge only .15 cents. I was passing along those savings to my customers.

It occurred to me that the banks are enjoying the same type of savings from technology, because they no longer rely on those analog credit card imprinters and carbon copy receipts that I would have to mail off to Florida for processing. The swipe fees were cost-based, so I couldn't understand why they weren't lowering the rates.

I did some research and found that in other industrialized nations, the rates were one-third what they were in the U.S., and yet the U.S. has the most advanced telecommunications in the world. In the U.K. the fee is 0.7 percent the purchase price; in the U.S. it's upwards of 2 percent. I found that in Canada, PIN-based debit card fees are zero. The banks haven't pulled out of Canada or Australia. In other words, the banks are still making money in countries where there are lower or no interchange fees.

As a result of the settlement, what changes now for merchants?

A really big one is that there are significant reforms to help control the merchant costs and consumer prices. Merchants now are going to be able to add a surcharge for the use of a credit card. But I don't think merchants will. Instead, I believe that just the threat of a surcharge is going to be used as leverage to make sure card companies lower their rates. That happened in Australia: the networks dropped their rates to ensure merchants would not surcharge customers who used cards. That's a really big benefit.

You say the settlement also allows merchants now to inform consumers about those fees. I was surprised to learn that merchants weren't allowed to do that in the first place.

Previously, we were prohibited from disclosing to customers the cost of using their cards. That was part of the terms of agreements when you accept Visa and MasterCard. Visa and MasterCard have agreed to no longer prohibit merchants from disclosing those costs. This will throw transparency into the system and create competitive pressures on the pricing of credit cards that's been absent in the past.

Wal-Mart has opposed the settlement, saying that it "would not structurally change the broken market or prohibit credit card networks from continually increasing hidden swipe fees."

When Wal-Mart is against something you have to follow the money. Wal-Mart doesn't have a seat at the table because they settled a $3 billion lawsuit against the credit cards in 2001. Back then, Visa and MasterCard immediately raised their fees to more than cover that $3 billion. Now, all retailers and small businesses will be allowed to join buying groups to negotiate lower rates. And that's what Wal-Mart is not thrilled with; Wal-Mart has such huge market power that it doesn't need buying groups. Now the tiniest little store can join a buying group to be on par with Wal-Mart.

You're saying credit card fees are that big a contributor to the difference in prices between big box stores and small retailers?

In many cases, credit card fees are the third largest expense for a merchant. Service stations have it the worst. A lot of them have gone out of business as gas prices have increased because people don't have cash to pay for gas. They use their credit cards and the service station has to pay enormous fees to Visa and MasterCard. So, technically, Visa and MasterCard are getting windfalls from high gas prices.

Wal-Mart now is saying to merchants: don't support the settlement. If a merchant has $60,000 in annual credit card interchange fees, they're going to be getting a check for roughly $20,000-$30,000. Companies like Groupon that are entirely dependent on credit cards will be getting millions of dollars because of this settlement. I can't imagine any retailer saying, "I don't support the settlement."

To sum it up, since the banks want, as corporations, to be considered as people, I would say this is a giant win for 100 percent of all Americans less about 10 people.