Which is the best and most effective way to reach out to the youth of India? Definitely it has to be social media and Lipton Ice Tea, an iced tea brand by Lipton is doing the same with the Get Refreshed Naturally campaign. To start with, the brand has focused on Bangalore for a 360 degree marketing campaign and later plans to roll out at 6 different cities. Even though the brand is carrying out offline initiatives of engaging with people in malls, schools, etc., it has been bullish on social media.

While talking to Suva Ghosh, CEO at BrandMovers India, the digital agency responsible for executing the social media campaign, he shared that – “The initial phase of the campaign started in February when we did a takeover of the Yahoo India website with an idea to spread across the brand message. Now we have created a microsite integrating with social media channels such as Facebook and Twitter.” 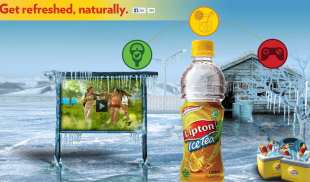 The microsite that lets you in once you have signed up with a Facebook login has 3 major features – 1) Take A Sip, 2) Refresh-o-meter and 3) Ice Tea Faktory.

“Take A Sip” is a virtual invite by the brand to take a sip from the Lipton Ice Tea bottle. With every sip you take, the background of the portal changes giving you a refreshed experience.

The work on the microsite started two months before and some of the design experience have been inspired from other previous works, shared Suva. For example, the big Facebook log in button was an idea that was inspired from Airtime’s big Facebook connect button. In fact, the big arrow button at the top of the bottle which is the hero of the microsite, has been inspired by a work initially done by personal social network Path.

Integration of Twitter – The second interesting feature “Refresh-o-meter” is about tweeting how one gets refreshed naturally. The site shows the stream of tweets and the tweet counter also provides a space to tweet. The site also pulls up some data to show users such as total tweets shared and the list of the contributors with their total number of tweets. The visually interesting Refresh-o-meter also has hidden gifts that will be unlocked at certain levels. So the idea is to keep tweeting the interesting ways one gets refreshed in this summer season and wish to unlock gifts.

This has got the hashtag #GetRefreshedNaturally to trend at the top of the India Trends since yesterday and the Twitter handle has been growing too. Suva informed me that the Twitter promotions would be going on for a month and there would be some more interesting ways of engaging with the users on Twitter.

The final feature on the microsite, the “Ice Tea Faktory” is an engrossing simple game that asks you to collect lemons, ice and tea combos. The highest scorers of the day get a monthly supply of Lipton Ice Tea to beat the heat and the top scorer at the end of the month earns an Apple iPad Mini. The game also gives you an entire analysis of players and their scores. Seeing the scores and the growing number of players, there is no doubt that the game is catching up fast. 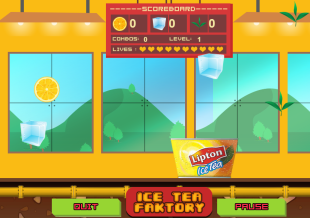 Talking about the numbers, though it is too early but Suva shared that every day the average spend time is increasing. However, he has promised to reveal more numbers once the campaign is over.

Integration of Facebook – The Facebook page which has more than 2.7M fans has created an exclusive Facebook app – Lipton Ice Faktory for its fans. The app is the replica of the game and on click leads you to the microsite. Speaking on the various other activities being carried out via Facebook, Suva informed that,

“We are running Facebook ads and the app has been built to capture new likes too. In addition to this, we are announcing the daily winners on Facebook and trying to build excitement with interesting content.”

Is it a refreshing campaign?

The campaign definitely is attracting users towards it. The idea of building a cool microsite, including simple game with exciting goodies and integrating social channels effectively are some of the features worth mentioning here. The idea of trending the hashtag has been interesting and organic where twitteraties have been asked to tweet about what gets them naturally refreshed via the microsite. Additionally, Facebook has been used rationally to drive traffic to the microsite.

However, we have seen some similar campaigns last year where we have seen Diesel India, ITC Grand Chola and Shoppers Stop doing the same. But these campaigns incorporated only the Twitter strategy where the gifts were hidden at certain interval of tweets and were revealed as users tweeted. However, the Lipton Ice tea campaign scores on the overall execution of the campaign and integration of social channels.

Integrated campaigns are going to be the attractions of 2013 social media campaigns and Lipton Ice Tea’s Get Refreshed Naturally campaign makes space for itself to be included in the list.