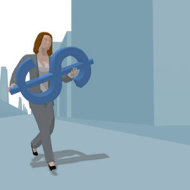 Last week we reported on small-business-supportive language contained in the National Defense Authorization Act of 2013 that is aimed at helping small businesses win more contracts with the federal government. One provision of the law signed by President Obama on January 2 is particularly promising for women small business owners. It removes caps on the dollar amounts of awards for which women-owned businesses are eligible.

Not only have government agencies consistently failed to meet the goal to award 23 percent of contracts to small businesses, but they also failed to meet the Women Owned Small Business Federal Contracting program goal to award 5 percent of contracting dollars to women-owned businesses. In 2011, the first year of the program, federal agencies awarded $16.8 billion in contracts to women-owned small businesses, which accounted for only 3.98 percent of federal contract dollars, according to the Small Business Administration.

Advocates say the caps—$6.5 million for awards to women-owned businesses in the manufacturing and construction industry and $4 million for contracts in the remaining fields—hampered the agencies’ ability to award the full 5 percent—or roughly $20 billion annually—to women-owned businesses. Lourdes Martin-Rosa, an American Express OPEN advisor on government contracting, says that because government agencies such as the Department of Energy often purchase one-year contracts with four-year options to renew, it can be very tough to find contracts small enough to comply with the caps. Indeed, DOE only awarded 1 percent of its contracts to women-owned businesses last year due, in part, to the caps. The caps' removal will give women a better chance at getting their fair share of government contracts, Martin-Rosa says.

What purpose the caps aimed to serve in the first place is not clear. The 5 percent rule was established in 2010, and compliance parameters that included the caps were introduced in early 2011. “I don’t think anyone has a grasp of why those caps were in place,” says Martin-Rosa. “We said ‘thanks, but we’d like to see the caps lifted.’”

Anie Borja, executive director of non-partisan federal advisory group the National Women’s Business Council, has predicted that “raising the existing dollar thresholds will help more fully achieve the intent of the implementation of the WOSB program, which has the potential to be a tremendous resource for women-owned businesses … Removing these award caps helps increase access to markets and will have a positive impact on the growth and economic impact of women-owned businesses.”