Jibo is a social robot for the home 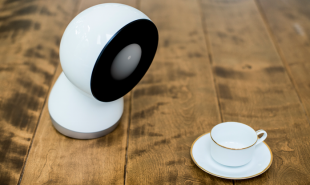 Robots in the home are currently limited to Roombas and smart appliances that can seem less like The Bicentennial Man and more like computers on wheels. There’s a growing trend to make robots act more like humans however, and we’ve already covered Budgee, the helper robot that carries luggage and follows its owners wherever they go. Now Jibo is a friendly robot that uses facial recognition and natural language processing to offer personal assistance in the home, and perhaps become a new member of the family.

Created by social robotics pioneer and MIT professor Dr Cynthia Breazeal, the robot looks similar to Pixar’s animated lamp, and is designed to elicit the same fuzzy feelings. Behind its circular face are two hi-res cameras, 360° microphones, a speaker, an on-board computer and wifi and Bluetooth connectivity. Jibo learns what it’s owners’ faces look like, as well as their voices, so it knows who’s speaking to it and who it’s addressing in its Siri-like natural voice. It can also sync with other smart appliances and learn homeowners’ preferences and daily habits.

Rather than working in the background however, the robot has been designed to be social. Users can call on it to take photos or video of special family moments and it tracks body movement and facial expressions to make sure everyone’s in the shot and looks happy. It can also give out personalized reminders depending on who’s in the room, and read bedtime stories complete with sound effects and matching graphics. Jibo is responsive and uses it’s swivelling base to make sure it’s facing family members before speaking.

Watch the video below to see Jibo in action:

While many companies and labs have been working on humanoid robotics for decades, Jibo may be the most characterful and also affordable robotic assistant. It’s currently available to pre-order from USD 499 via Indiegogo, and the company’s already sold out of its first batch due to be shipped in 2015. Are there other ways to make technology more friendly?