Is The Employer Always Right? 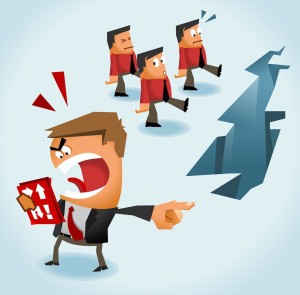 In this new, chaotic, and uncertain century, with its more and more minutely specialized occupations and skill sets and with nothing to do with the faltering economy, it’s not only human resources employees who might not be familiar with certain job skills and the actual needs of the open positions in their organizations. Believe it or not, the hiring managers themselves many times don’t know their own needs until the hapless chosen candidate has completed a typically extensive, lengthy, complex, and personally probing on-boarding administrative process and the candidate has already started reporting for work. Then the employer suddenly dismisses the employee—after perhaps only one or two days on the job—saying it has decided the employee’s skills apparently don’t match the actual needs of the position. That reason is not an employer cover-up for dismissal for a different reason. It is indeed the actual reason.

We’re living in a fast-paced world. Not only in our personal and family lives is everyone in the household or among our acquaintances going in different directions, but the same phenomenon is prevalent even more at work. For instance, the economy forces senior management to make budget cuts, which then cascades down the chain of command. Sometimes management changes are made, and literally everyone gets asked to do more with less and in less time. It’s no wonder, then, that hiring decisions nowadays are going not through a reasonable-length process but through an accelerated, hasty process—one that brings its victims. Employers are treating staff like a printed circuit board in an electronic module: Plug it in, and let’s see whether it’s working. If it is found that the wrong part has been used, it gets quickly replaced with a new one. Perhaps the replacement part will work better.

It is a fact that high employee turnover is very costly and not only in dollars and cents. Does the employer regret or feel contrite that such a dismissal—not based on the employee’s fault—leaves an indelible scar on the psyche of the employee? The answer is, most likely not. And the painful part of that too-often occurrence is going to stay with us until the buyer’s market shifts to the seller’s market, the way it used to be in the late 1900s.

Many people in America lost their jobs because of a shift in the economy that was due to the transfer of a large part of manufacturing to countries where labor is less expensive. Another reason is that evolution of the technology whose machines and computers introduced efficiency made people or hands become redundant. And generally, people are slow in adjusting to the new world. For instance, today’s car mechanics need specialized computer skills and knowledge; otherwise, they cannot repair today’s highly computerized vehicles.

So, with these sorts of rapid changes here to stay, the only issue we’re left to grapple with is whether employers are always right. Do you know? Do you have an answer? What’s your opinion?

This article was syndicated from Business 2 Community: Is The Employer Always Right?