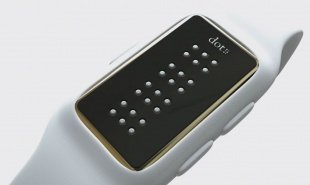 The Dot braille watch is a smart device designed to enable visually impaired users to read smartphone data in real-time — including e-books, directions and text messages. But as the Fast Company has reported, the smartwatch is actually best suited for its least flashy purpose — telling the time. Dot is a digital e-reader which syncs with the user’s smartphone, and displays tactile messages via pop-up braille characters on the device’s changing display. The problem is that the display only hosts four characters at a time, and even though it refreshes at an adjustable reading speed, the stream of broken up words creates a incredibly disruptive reading experience for even short messages, let alone articles or e-books. However, as Neva Fairchild from the American Foundation for the Blind has pointed out, the limited display is perfectly suited for enabling visually impaired users to discreetly ascertain the time — a capacity which is surprisingly underserved by current devices. Current braille radial watches are clunky to use and smart devices tend to simply read out the time aloud, which can often be inappropriate.

Dot is significantly cheaper than the average braille e-reader at USD 300, but these can display anything from 12 characters to 40 characters at a time. It is set to launch in December with ambitions to bring braille reading to the masses — perhaps a simplified version designed specifically for telling the time would also find a place in the market?