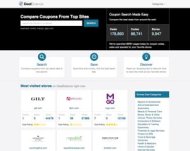 As Groupon struggles to reinvent itself this year in the wake of a 40 percent share price decline, an emerging online coupon company says it’s growing like gangbusters. Though this startup delivers deals at mostly large retailers and services, the model could also help drive new business to smaller merchants with e-commerce capabilities.

Brandon Hunt and Cory O'Daniel co-founded DealScience.com last year to capitalize on the "extreme couponing" trend. They claim their scientific approach to aggregating and serving up coupon codes, sale items, and special offers (such as “buy one, get one free”) has saved consumers more than $5 million through 800,000 deals since their November launch. They call it a one-stop-shop for finding and comparing deals online.

The two were vice presidents at the airline and hotel discounts website DealBase Corporation when they conceived the idea for a Kayak.com for coupon comparisons. “There was a big hole in the market for easy coupon searching and comparison,” Hunt says. With funding from their employer, he and O’Daniel developed DealScience.com. “It did so well, that we decided to spin it out and make it its own product,” they say.

They now operate DealScience.com independently in Manhattan Beach, Calif., with a 6-person staff, and rely on a about 20 editorial contractors to research the policies and rank the reliability of offers from every merchant whose coupons are to be featured on the site. To date, DealScience has published coupons from 9,915 stores, is researching another 40,000 merchants in its database, and publishes deals from new companies at a rate of 250-500 per week.

The site has also offered more than 35,000 customized shopping tips to its 10,000 + daily visitors. Those include answers to questions such as, “Where can I find deals on restaurant and kitchen equipment?” (Answer: The WEBstaurant Store, where Kitchen Aid mixers are marked down 19 percent) or “Where can I find camping gear on sale?” (Answer: The Sportman’s Guide’s Sale, where teepee tents are 60 percent off.)

And DealScience.com gives shoppers insider tips gleaned from its own data. Clues include: one-third of all coupons are published mid-week; big retailers like Walmart, Best Buy, Kohl’s, Target, and Sears offer price-match guarantees; stores like Bed, Bath & Beyond, Kmart, Gap, and Home Depot offer deals so consistently that you should rarely pay full price there. 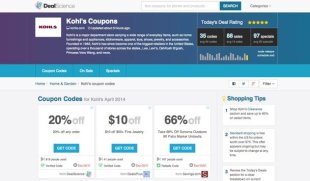 DealScience.com rates the reliability of deals and offers shopping tips.

The service isn’t exclusive to big box stores’ deals. Hunt and O’Daniel say that a handful of smaller retailers have emailed them to ask to have their coupons listed. “We like that they want to work with us, so we always put them at the top of the list. Once you contact us, it’s 72 hours before we can do the research and post a page,” they say.

As for the merchants whose deals are featured on the site, Hunt says, “They love us. We’re either driving them new business or we’re helping them drive sales of a discounted product. We’re also helping them close sales: if someone is interested in a product, they come to our site to ask, “Is there anyway I can save money on this item?’ When we help them get the discount, we’re helping the merchant close the deal.”

For local or regional businesses that have the ability to accept online orders and ship nationally, “we can get them traffic they didn’t have previously because they didn’t know how to market outside their region,” Hunt says.

Meanwhile, of course, DealScience is gaining knowledge about consumer and merchant behaviors. “We’re archiving and aggregating lots and lots of data,” he says. “There’s a lot we’re not displaying yet. We’ll be creating passwords for brands to access the data and learn about their competitors. That’s where the ‘science’ in DealScience comes into play.”