Device is a smartphone, tablet, laptop, desktop and smart TV in one 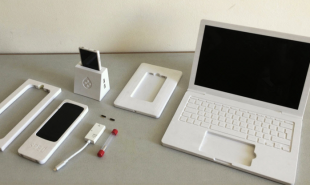 Owning a number of different devices can often mean having to regularly transfer data between them to keep them synced, or storing private information in the cloud. Offering a truly connected alternative, Seed is a set of mobile and computer products that use the processing power and data of a single docked smartphone.

Designed by South Africa-based computer engineering student Nick Rout, the basis of the system is a smartphone — which nowadays rival the computational power of desktop computers of only a few years ago. Using a powerful processor such as a Qualcomm Snapdragon 805 or an Adreno 420, 4GB mobile DRAM and 128GB of flash storage, the smartphone would be able to dock into a tablet, notebook, desktop PC and HDTV using a magnetic locking mechanism. Instead of each device being separate and running different operating systems, the smartphone acts as a portable computing system that simply plugs into the form that users want to work with. The video below explains a bit more about Seed:

The concept is something that has already been explored commercially with the Asus PadFone, a smartphone and tablet docking system. Seed, which will run on the open source Ubuntu OS, aims to connect more than just mobile devices, however. Although the project is currently still in the design phase, such a system could bring down the cost of owning multiple devices — as well as the multiple connecting cables that go with them — and make sharing between them a thing of the past. In the future, could ideas such as this help consumers see devices less as disjointed platforms and simply a different way to experience the same technology?