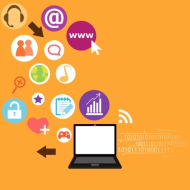 CrowdFlik: Crowdsource Your Visual Content MarketingHave you ever been to a concert and tried to take a video on your phone? It can be nearly impossible to record a quality clip, with crowds in the way, shaky hands, poor audio, or even bad seats.  Phone videos from concerts rarely do the performance any justice, and serve more just as physical proof you attended a show. However, a new application has the ability to turn short camera-phone videos into pieces of a video montage. CrowdFlik allows people attending a concert to select the best videos from the show and edit them together into a single recording.

A simple way to explain CrowdFlik is to think of a concert or event as one long video, and each user’s recordings are different angles or camera shots of the same video. The recordings are broken down automatically into 10-second pieces, giving you the ability to quickly cut between different camera angles.

For example, say six people all recorded the same 1-minute video from different seats at a concert. You could select a different camera angle for each 10-second interval of the video, showing the view from each person’s seat. Also since the timing of these videos is auto-synced, there won’t be a break in the performance.

Get a Better Seat… Digitally

The beauty of this application is that, even if you can only record a low-quality video from your seat, you can choose the best video clips from other uses to create your own masterpiece. Users can simply search the event they are attending by name, or using the nearby events feature, to find all videos recorded by others in attendance. Using these features, you can even create videos from concerts and events you didn’t actually attend. If you missed your favorite band in concert, you have the ability to make up to a 50-minute video of the performance, from the best seats (or any seats) in the house.

Stacking Up Against the Competition

There’s plenty of competition for video applications, with giant competitors like Vine and the recently-introduced Instagram video. But where CrowdFlik can find its success is the niche that it serves, and its creative functionality. Vine and Instagram both are able to take videos to document wherever you are or whatever you’re doing, but are limited by short time constraints. CrowdFlik stands out from these apps because of its ability to curate videos from other users, and creatively edit videos. The biggest key to CrowdFlik’s success will be developing a large enough user base to challenge the video application giants.

Continued success of mobile application comes from functionality, and the ability to grow and optimize the app. CrowdFlik has plenty of potential to be improved and expand on its features. More advanced editing tools could eventually be included, such as transitions, filters, and effects. Also as more users download the app, further adjustments can be expected in response to user desires or complaints. CrowdFlik is already available on the Apple App Store, and is coming to Android devices sometime in August.

As someone who attends many concerts, I always find myself recording a video during the show, but then deleting the video from my phone days later because it has no value or use. My friends won’t care to see a minute from the middle of performance and I won’t watch that video again with any excitement. Crowdflik’s value is that it allows you to create a record of a concert that lives up to the actual experience you had at the show. Concert attendees will be able to re-experience their favorite performances from a wide choice of perspectives, having total control of their own visual creation. Crowdflik already an exciting model in place, and with the creative control placed in the hands of the users, the possibilities are endless.