Is This Company The Next Chipotle? 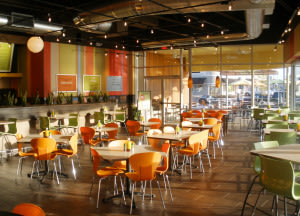 Is This Company The Next Chipotle?

Zoe’s Kitchen went public earlier this year and is hoping to have a Chipotle-like rise. Credit: Zoe’s Kitchen

My co-worker, the legendary Bill Palifka, came up to me today and had some advice for what I should write about next: Zoe’s Kitchen, a Texas-based “fast-casual” restaurant chain that serves kabobs, pitas and other Mediterranean food (full menu here).

“I’d invest in that company,” Bill said, who raved about the food and how he felt like he was getting good food, served quickly, as opposed to the traditional fast food fare. He said he wouldn’t feel guilty taking his son to dinner there, which he said he would if he took him to McDonald’s.

Investors agree. Zoe’s went public earlier this year and raised $87.5 million on its opening day. That’s an impressive figure, considering that’s 25 times the company’s adjusted earnings in the past year, and more than two times their gross annual revenue.

So why are investors so bullish on Zoe’s? Because they look no further than the company it most-closely resembles, Chipotle (just substitute Mediterranean food for Mexican), which has seen its stocks improve nearly 12-fold since it went public in 2006.

Zoe’s, which has 131 locations in mostly urban locations primarily throughout the south, doesn’t do the same sort of business Chipotle does, even on a per-store basis. The Motley Fool reports that the average Zoe’s does $1.04 million in sales per store annually, as opposed to the $2.07 million Chipotle stores average.

Still, what investors are betting on is not just Zoe’s or Chipotle, but a changing market that’s reflecting the sentiments Bill described. And that is people are moving away from the low-quality food that has marked two generations of fast food, and more towards healthier options with higher-quality ingredients – even if it cost more.

How big is the market just described? Well, the runaway success of Chipotle alone proves that there is clearly a market for higher-quality fast food, even if it is more expensive.

But it isn’t just Chipotle that’s proving it, as the burger market is moving more towards companies that offer higher-quality burgers, despite their higher cost. Specifically, Five Guys and Shake Shack – two burger joints that fit that description perfectly – are taking market share away from the big guys, i.e. McDonald’s and Burger King.

Look at the numbers. The burger market has contracted by 0.8 percent in America, as more and more people are avoiding unhealthy foods. However, sales at “better burger” restaurants like Five Guys and Shake Shack are growing at a rate of 16 percent annually, leaving less for traditional staples like a Wendy’s.

To compete, many of these traditional fast food companies are offering healthier options and trying to promote the quality of their ingredients. McDonald’s, for example, even hired the two guys from Mythbusters to disprove all the rumors about their food and have run an advertising campaign lauding the quality of their beef.

This article was syndicated from Business 2 Community: Is This Company The Next Chipotle?