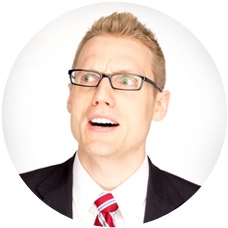 Author, serial entrepreneur, and business coach Clay Clark comes across as a Jim Carrey of entrepreneurs. His energy is infectious, his smile all goofball, and his honesty disarming. He’s a 30-something Tulsa father of five who calls himself “America’s #1 Business Coach” as well as “America’s Most Humble Man.” The slogan at the bottom of his emails is, “Read My Books. Expand Your Wallet.”

The books, which indeed could have that effect, include: “Make Your Life Epic: From the Dorm Room to the Board Room,” (a “step-by-step guide on how you can mold your future to be ideal in every way”); “Wheel of Wealth,” (“do these things and you will make big money”); and most recently “Thrive: How to Take Control of Your Destiny and Move Beyond Surviving…Now!”

Beyond the business books, however, Clark’s latest and perhaps greatest contribution to the nation’s would-be entrepreneurs is an (initially self-funded) “edutainment” company called Thrive15.com that conveys his Wheel of Wealth concepts—“20 areas of business mastery that we believe everybody needs to master in order to build a scalable business model”—into bite-sized video interviews with leading business people. He calls it an “interactive online classroom for entrepreneurs and aspiring entrepreneurs” and says it’s a secret weapon that will teach business owners everything from “the basics to how to beat your competitors.”

For about $50 a month, subscribers get access to several hundred video interviews with a cast of 17 (and counting) successful business people, offering lessons in each of the 20 categories that make up Clark’s Wheel of Wealth. Those include accounting, branding, business models, capital, customer service, legal, marketing, and sales.

Thrive15 offers a free membership to one military Active Duty or veteran for every paying member, and it awards monthly prizes to its most active members.

Clark also promises enrollees they’ll have fun. To be sure, liberally interspersed with the serious learning is plenty of laugh-out-loud humor. Mentors’ biographies, for instance, are populated with entertaining anecdotes—“Arthur sincerely thought he was done having kids after his vasectomy, but he later discovered that this procedure failed and that he and his wife would soon be proud parents of another beautiful baby. For more information about Arthur Greeno or failed vasectomy procedures visit [his website]—and Clark imbibes his on screen interviews with Stephen Colbert irreverence.

Clark says he grew up “not homeless-poor, but in a financially challenged family.” Napoleon Hill’s book “Think and Grow Rich” changed his life, he claims, inspiring him to become self employed, and propelling him to accolades including SBA’s 2007 Entrepreneur of the Year. Now Clark wants to give back by helping others like him. He saw book authoring as a way to reach more people than he could as a coach, but his “a-ha” moment came when he heard Steve Jobs’ remark to President Obama: “it is absurd that American classrooms are still based on teachers standing at a board and using textbooks.”

The site’s subscription fee, he says, has as much to do with attaching value to the program for its attendees as with generating revenue. “I know that anything I don’t pay for I don’t value, and $50 a month is enough of a sacrifice for someone coming from place of disadvantage.”

After three years in development, Clark officially launched Thrive15.com this year. He says he now has subscribers worldwide, counted 25,000 unique visitors last month, and is getting good feedback such as, “It’s like having a mentor in your pocket, and the person teaching you is a success story.” Clark says, “A lot of businesses exist to be self-sustaining. Thrive exists to let you know you can move beyond surviving. You can really seize every day … and grow.”