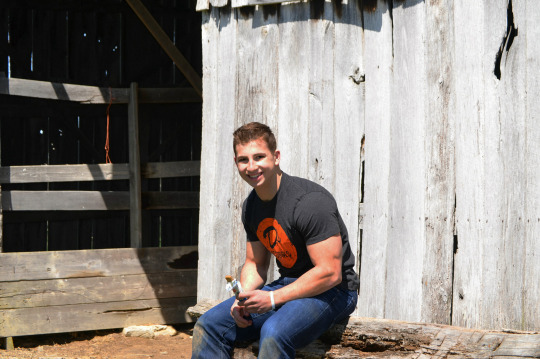 Some people have business in their blood.

Six years ago, when Daniel Katz was 12, he got his first
mobile phone – a standard flip model. Then he noticed that one of his parents
had a nicer mobile phone, a
Blackberry. Daniel found himself wondering, “How can I get that phone
without spending any money?”

He got his dad to drive him around Cincinnati. “He’d
drop me off in some public area,” Daniel recalls, “and I’d go up to
random strangers and buy and sell and trade cell phones. I traded my standard
cell phone for one that was a little better, and then I got a different one,
and after a couple of weeks I ended up with a Blackberry. And $50. After that,
I was totally hooked.”

From Janitor to CEO

Daniel Katz, now 18, is Founder and CEO of D’s Naturals, a brand new company that makes
ultra-healthy protein bars. He’s something of a one-man-band, managing all the
operations of the company “from janitor to CEO.”

“For some reason,” he declares, “from the day
I was born I’ve had a burning desire to succeed—to create goals and accomplish
them. Whether it be fitness, entrepreneurial, anything that includes a constant
struggle.”

Following his success in the cell phone trade, the
now-13-year-old entrepreneur tried buying and selling electronics on Craigslist
and ended up several thousand dollars ahead. Soon thereafter, at the ripe old
age of 15, Daniel got into the automotive industry. He didn’t have a drivers’
license yet, but that didn’t stop him from buying an old car on Craigslist,
fixing it up, and selling it for a profit. “I was going to dealer
auctions,” he recalls, “and competing against other car dealers, buying
cars and selling them a week or two later. I sold ten or 15 cars during my high
school career. When I got my license at 16 that made things easier.”

‘When an Obstacle Arises It Makes Me Happy’

Daniel graduated high school a year early, and started
Indiana University when he was 16. But he had the hunger now, and college was
just slowing him down. He lasted three months, spending most of that time
constructing a business plan for a beverage company. Eventually he moved out to
Los Angeles to manage the new business—a 17-year-old on his own.

Unfortunately, some of his packaging design consultants left
out a critical piece of information needed for selling in California. It was a
fatal mistake. Most people would have taken this body blow to heart, but that’s
not how Daniel is built. In some strange way, he actually likes it best when
things are going wrong, because he enjoys figuring out how to solve the problem
and keep on going.

“When an obstacle arises,” he declares, “it
makes me happy, because I know it’s a challenge I can deal with, and figure out
how to solve. The incident in California gave me time to sit down and make sure
I was on track for success. I saw rapid growth in the plant-based segment
within the all-natural food category. And that¹s when the No Cow Bar popped
into my head.

No Bull. No Whey.

Daniel is a health and fitness fanatic, and when he went
looking for a really healthy protein bar that was dairy-free, low in sugar,
high in protein, and in a convenient grab-and-go format, he couldn’t find one.
You and I, perhaps, would have settled for something less than our goal—but
Daniel isn’t built that way.

"It was a product that I needed, personally,” he
laughs. “I couldn’t find anything like it on the market. So I made
one.”

The website for D’s Naturals’ No Cow Bars makes it perfectly
clear what you’re buying:

Daniel is not shy about letting people know why No Cow Bars
are cool. “It’s the healthiest protein bar ever created,” he boasts.
“They’re 100 percent dairy-free, gluten-free, vegan, we add no sugar
whatsoever so there’s only one or two grams of sugar per bar, 170-180 calories,
and only two or three grams of active carbohydrate. If you’re looking for a
healthy product you can’t find anything better on the market.”

Initially, Daniel sold the bars through Amazon, and his own
website. But from the very beginning, his path to success included national
distribution.

“Three or four weeks after I launched the
company,” he says, “we signed with Europa Sports, the largest health
and fitness distributor in the country. Europa sells to mom-and-pop stores,
health and fitness stores, and gym chains…so we’re now available
nation-wide.”

Within two and a half
weeks of launching, Daniel’s new company broke $150,000 in sales. And within
three months Daniel had raised $3 million of outside investment.

Obviously, getting a national distributor has added to his
credibility, but there are still huge challenges. Trying to get a new product
onto store shelves is no joke. Daniel gets meetings with large retailers, but
in the end he’s just an 18 year old kid with a new product that doesn’t have a
lot of proven sales yet. Fortunately, public speaking is a strong suit for
Daniel, and to some extent the product sells itself.

And Daniel is obsessed with making his goals.

“I have a burning desire to succeed,” he admits.
“A lot of investors see that. I run on very little sleep, and I’ll do
anything it takes to reach my goal. Working with formulation teams, packaging,
your legal stuff, your trademarks, your taxes…”

You can add coding a website to that list too. “Yes, I
did it myself,” Daniel says. “I taught myself to code in a couple of
days and four days later I had finished the site.”

Even with the infusion of capitol, Daniel remains cautious,
especially about marketing. “The money doesn’t impact me much,” he
explains, “because I’m not necessarily going to spend it. I don’t need to.
Social media has been a great way for the company to grow. I’m not going to
spend unnecessarily when I can accomplish the same thing for free.”

The company already has over 12,500 followers on Instagram.
“It’s almost a movement,” Daniel says. “I’m trying to express to
teens and millennials that you can go after anything you want in life. People
say it’s impossible for me to get to the point where I’d like to be, and I’m
not saying I’m there yet, but I’m definitely well on my way. Anything’s
possible.”