New product releases and announcements from Microsoft, Nokia, and Apple advance the mobile market and could have lasting implications for the field force automation market down the road.

At MSI Data, our cross-platform mobile field service software puts our customers at the forefront of field force automation in the markets they serve. As such, we monitor and report on mobile technology, so they don’t have to.

Last week was a huge week for mobile as Nokia, Microsoft, and Apple all either announced or released new products. In a recent post we explored whether Microsoft’s attempt to combine their own software and hardware, their acquisition of Nokia, and their updated operating system would be enough to make them a contender with Apple and Android in the field force mobility race. Here we’ll take a look at the future of enterprise mobility and what new advancements in the field could mean for your field service organization down the line.

After announcing their new tablets last month, Microsoft officially launched Surface 2® and Surface Pro 2® at midnight on Monday. The tablets are equipped with the same amount of power as most laptops and are built with businesses in mind. With the addition of a docking station and full keyboard, Surface Pro 2® looks and acts like a laptop, but is mobile and light weight like a tablet. This means that businesses can use the tablet in the office or in the field without the need for other devices.

Nokia announced the plan for its first tablet, the Lumia 2520®, along with the Lumia 1320® and 1520® phones (phablets). Nokia picked a surprising time to announce its new products considering Microsoft recently announced its plans to purchase the company and Nokia’s Lumia 2520® directly competes with Microsoft’s Surface 2® line. However, it’s likely to be the firm’s last major event before it completes the sale of its hardware and Microsoft claims the more devices on the market, the better for the industry. The Lumia 2520® uses a Windows operating system, installed with Microsoft Office Outlook, and touts a longer battery life and full keyboard for consumer and workplace use.

In addition to Nokia’s product announcements and Microsoft’s product release last week, Apple announced its plan to release the iPad Air®. The iPad Air® is faster and thinner than older iPads® and is complete with retina display and the A7 chip it introduced in the iPhone® 5S.

What’s more surprising than its product announcement, however, is Apple’s announcement that they will include the operating system OS X and the latest versions of its iWork and iLife apps free for the Mac®, iPhone®, and iPad®. This is an aggressive enterprise push by Apple to target the small business market. And since Microsoft generates 96% of its operating margins from operating systems and productivity software licensing, Apple’s software giveaway could put new competitive pressures on the industry. By offering its software for free, Apple could be setting the precedent and expectation of free software in the future, challenging companies like Microsoft to meet their standards and transforming the enterprise computing world in the process.

Battle in the Cloud

As these mobile companies continue to duke it out for the top spot in the consumer and enterprise mobile market, it will be important to pay attention to their efforts to improve business operations. The future of enterprise mobility, and the real battle between these companies, will take place in the cloud. As connectivity and on-demand self-service become bigger priorities for customers, mobile giants will need to start focusing on features in cloud computing as they look to advance the mobile market for businesses in the future.

The major product launches from Apple, Microsoft, and Nokia last week reinforce our feeling that field service organizations stand to become some of the biggest beneficiaries of the use of mobile technology in their operations.

What do you think these mobile advancements could mean for your company? Where do you see mobile taking you in the future?

Take Advantage of Mobile Apps for Your Organization

A Big Week for Mobile: New Products Vie for the Field Force Automation … 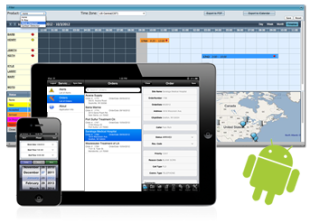