When Ted Steen and Claudia Bouvier decided to make a major lifestyle change to raise their young daughters away from the hustle and bustle of the New York metropolitan area, they thought they might have to sell the events and banquets business they had been operating for a decade in Stamford, Conn. 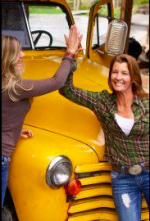 Instead, last summer they loaded their iPhones with apps including Dropbox, SuperCam Pro, and Honeywell thermostats, and loaded a box truck with their life’s possessions. They now manage their catering staff and coordinate weddings and bar mitzvah celebrations at Bank Street Events in Stamford from their new home in Boulder, Colo. 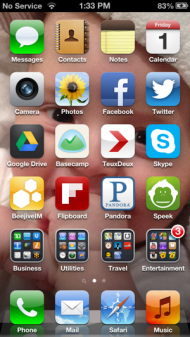 Steen and Bouvier are part of a new breed of small business owners who use apps to operate their companies on the go or from altogether remote locations. Scott Gerber, founder of the Young Entrepreneur Council, says that entrepreneurs in the under 35 age group are especially savvy about adopting apps to be more productive and grow their businesses more efficiently. Among Gerber’s favorite apps: BaseCamp for project management, Speek for conference calls, FlipBoard for keeping up with content he cares about, and Google Drive for collaborating with members of his national network. TeuxDeux is his first choice among a plethora of apps for managing a massive to-do list.

In Boulder, Steen uses cloud storage on Dropbox to coordinate liquor inventory, linen deliveries, and party floorplans with his facility manager in Stamford. “We can map a wedding reception layout at home in Colorado, put it on Dropbox, and my manager can set up tables by referring to the plan on his iPhone screen,” he says.

Dropbox’s mobile app also puts payroll and other financial data at Steen’s fingertips, no matter where he is. When he flies East to meet with his staff, he doesn’t carry a laptop, just his iPhone. He gets notifications on the phone when his building’s alarms are set or triggered, and, using the SuperCam Pro app, he can access surveillance cameras around the building to see if deliveries have arrived or when a party ends. 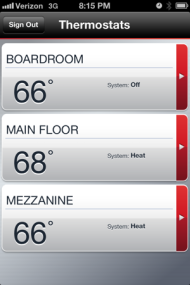 Honeywell’s thermostat app lets him remotely control the temperature in the building 1,800 miles away. “As a small business, we make money by keeping our costs down. Our electric bill can be $3,000 in a month when someone accidentally leaves the air conditioning running in the basement.” Being able to shut it off from home in Colorado is worth the approximate $5,000 system setup fee, Steen says. But even on site, he now prefers using the app. “At a wedding on Saturday, a guest told me the bride was feeling warm. I just took out my phone and turned down the heat,” Steen says.

David Hancock, founder of Morgan James Publishing, lists eVoice and eFax among the apps that enable him to rely on a team of 35 independent contractors working remotely across the U.S. to publish 150 books a year.

“I’m the only one who goes into an office,” says Hancock, who left a career in banking to start “the entrepreneurial publisher” business 10 years ago. He pays a small monthly subscription fee so his editors, designers, artists, marketers, public relations pros, and publishers can install eVoice to make and receive calls from their mobile phones on a company phone number with a unified caller ID system.

Hancock uses eFax to scan and send new author contracts as well as any other documents he picks up in his travels. “I don’t like to carry stuff home with me. Anything I need to take back, I scan it so I don’t have to keep a physical paper file, and I can use eFax to digitally sign and send documents,” he says. Being based in Virginia with his company headquarters in New York City, Hancock also likes Box.com for integrating project management among staff spread from New Jersey to Idaho. He uses DocuSign to set up author contracts, the PayPal mobile app for accepting checks and sending invoices, Square for swiping credit cards, and the Wells Fargo banking app for managing the company’s finances. And though Sirius XM radio for iPad and iPhone might not be considered a business app, Hancock says he doesn’t go through a workday without using it. 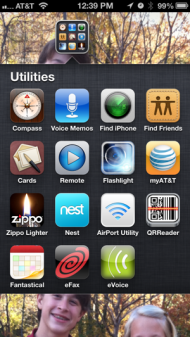 Even a business that’s founded on the appeal of old-fashioned farm living and vintage style has taken off using mobile apps. Carole Sinclair, co-founder with Kim Berry of Farmyard Darlings in Lafayette, Calif., says she approached an attorney friend for advice on formalizing the business as well as possible book and TV deals. “She told us we needed to talk to a lawyer, but that her costs were way too high, so she referred us to Rocket Lawyer,” Sinclair says.

She used the online legal service to file LLC paperwork before discovering there was a Rocket Lawyer app she could download to her phone. Since then, Sinclair says she uses it while she’s on the road—hunting for vintage finds and promoting her business—to create and execute non-disclosure agreements and contracts. She pays about $20 a month for the service. She also relies on the Google maps mobile app to find her way around the countryside, and says she can’t imagine life without Dropbox for invoicing, sharing documents, and accessing business documents anywhere she needs them.

Formerly a public relations agent for venture capital firms in Silicon Valley, Sinclair says she’s living her dream running Farmyard Darlings. Her high-tech IPO days might be behind her, but apps now let her run her office from the dashboard of a ’51 Chevy pickup.

Have a favorite app for running your business? Tell us about it in the comments