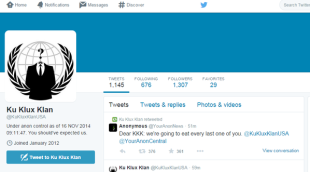 The Ku Klux Klan Twitter account has been hacked and taken over by the hacktivist entity known as Anonymous. The hack occurred on Sunday night as part of the groups new #OpKKK campaign.

At 8:18PM the account @YourAnonNews sent the following message:

Apparently the Ku Klux Klan thought the hack announcement was a joke, as they tweeted the following message:

We are continuing to read Anonymous threats with much amusement. Still no action taken. #Cowards #HoodsON 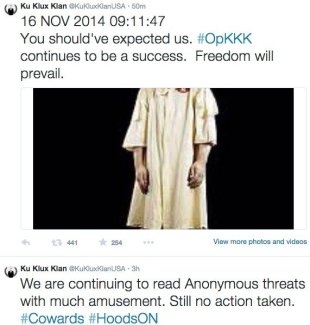 Before Anonymous hacked the KKK Twitter account, the hate group sent out a message asking the hacktivist collective how they could attack a group when they themselves value freedom of speech:

Why are you trying to kill my freedom of speech @YourAnonCentral I thought you Anons were all about free speech. Cowards!

Of course the Ku Klux Klan were attacking Ferguson Protestors right to freedom of speech when they distributed flyers last week which threatened “lethal force” against Ferguson protesters in any aftermath of the upcoming grand jury decision regarding Ferguson police officer Darren Wilson.  The message on the flyers reads:”Attention: To the terrorists masquerading as “peaceful protesters”!… We will use lethal force as provided under Missouri law to defend ourselves.”

On Friday members of the Australian sector of Anonymous released this attack message against the KKK:

The Ku Klux Klan continued to mock Anonymous right up until Sunday night when the hacktivists posted a victory message:

At this time the hacktivists are working to bring down KKK websites from all over the country. The groups goal is to blackout the KKK’s attempts to recruit new members and spread their violent and disgusting messages throughout the internet.

No further information has been revealed at this time, and I have a feeling Twitter is not going to act too quickly to restore account access to the KKK.

No official statement has been made by the Ku Klux Klan at this time. It’s a little harder to get your message out these days when you don’t control your own social media accounts.