Let me make this clear: I am not an iPhone lover who hates Android. I’m involved with Android app development, and in spite of the problems with developing apps for Android, I absolutely love this open-ended operating system. I’ve been getting involved in too many Android vs. iPhone fights recently and I think that it’s time to step into the shoes of the people who so cordially drag me to flame wars. I decided to enter the world of their dreams and see what it looks like.

There are some fantasizing about Windows 8 killing Android while there are others dreaming the same (just as others who dismissed Android at the start). There are voices all over the Internet talking of Apple killing Android in different ways. What if all these predictions are right. Poor Android will die!

I’m imagining a future where all these arguments come true (with a twist, no less). I’m looking at the world through glasses made from gloomy gray clouds and envisioning a situation in which Android OS crumbles and the whole world is enveloped in a thick crust of dead Android-based mobiles. What Android weaknesses led to its demise? Here are the the three things that killed Android, leaving Apple to dominate the market. 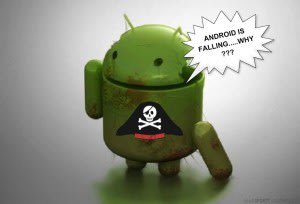 Android OS Failure Postmortem: A Peek into the Future

In 2013, it was hoped that most Android users would be using either Gingerbread or Jelly Bean by the end of the year. But as Android launched 5.0 Key Lemon Pie in 2013 and 6.0 Lamb Chops and 7.0 Milk Solids in 2014, the operating system version fragmentation finally proved too be too much for the Android developers.

On top of it, Apple pulled a rabbit out of the hat and compounded the problem by flooding the market with a slew of cheap but stylish Android devices that sold too well. Most developers could not bear the strain of developing for 500 different devices and seven major operating versions. After the cost of market research for Android apps doubled the cost of app development, no company was ready to offer android app development services.

Google Simply Gives Up, Says Google Glasses are the Future

Google’s user response test for Google Glasses, involving 8000 participants, revealed that users who once put on Google Glasses simply cannot take them off. After the results became known to Eric Schmidt, he called a meeting of all the top investors and employees of Google at Grand Canyon. Through a real life imitation of a Power Point presentation (involving Google Glasses, jet planes and The Hulk), he convinced everyone that the Google Glasses were the future and smartphones had no future.

Google diverted all its fund in the Glass Project, leaving Android fund-less. As no new versions of the Android OS entered the market for a long time, device fragmentation was reduced and the operating system thrived for a while. Only a couple of device manufacturers built devices for Android and so it was easier to develop apps for Android, finally. But when newer versions of iOS came out in the market, very few were interested in ancient Androids.

Just as strict anti-trust laws and legal setbacks slowed down Microsoft in the 1990s, legal wars with Apple and anti-trust proceedings by US government and the European Union made things very difficult for Google. Google could not pump enough energy or money into legal battles against Apple. The court awarded Apple victory and ruled that Android was guilty on all counts.

Google felt that the best way to end the whole thing was to publicly apologize. “Our operating system is a bad copy of iOS. We simply talked to the iOS designers and developers after work in a bar and whatever words of wisdom escaped their lips, we collected. That and total copying helped us build Android OS. The device manufacturers simply copy iPhone and iPad designs. They work in darkness, trying to build an iPhone. So, whatever comes is slightly different from the real versions. But now we cannot continue,” a teary-eyed official from Google announced.

The court ordered the destruction of Android OS and decreed that all Android devices are illegal. It also said that people found using Android phones will be given 100 hours of community service which would largely involve listening to iPhone users chanting the phrase “I told you so” one million times. After the ruling, the whole courtroom erupted into an impromptu version of the iPhone song.

I think that these were the three most important reasons for Android failing. What do you think led to its untimely demise? Are there some facts that I am missing? Let me know!